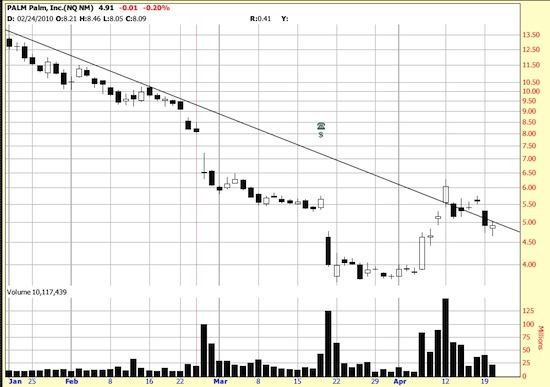 We are constantly warning readers about the dangers of speculating in stocks.  That doesn’t mean we don’t do it, but we don’t encourage it.  A bad habit, and a vice which like all vices is fun but destructive.

Which brings up an interesting question  — if we Californians legalize marijuana in the November elections will it no longer be a vice?

Either way, not a vice of ours.  Bordeaux is our vice.  And speculating when bored.

A few days ago we looked at PALM and thought it might be worth a roll of the dice.  We specified the stop procedure and noted that it was a play and that only the bored and the playboys should do it.  It quickly developed that it was a bull trap–snap.  When an (apparently) runaway gap like this is closed the next day it is a cancelation of the signal.

Anyway we shouldn’t be fooling with these slow nags in claiming races.  Why, when QQQQ is up 19% from the wave low? 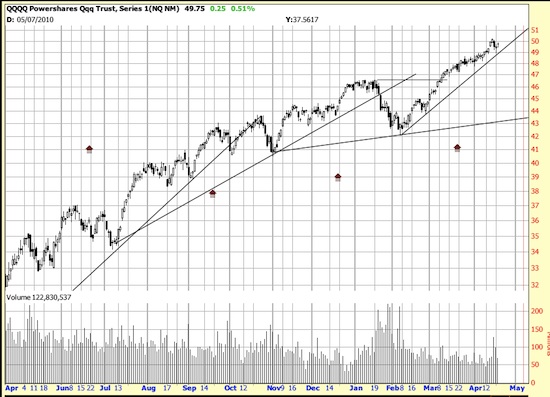 As Crocodile Dundee said of knives, now, that’s a trend.

Friday it appeared that we might have started a downwave with a power bar down — but the analyst’s most powerful tool stood us in good stead — that is, waiting to see if there is follow through, and there wasn’t. (So far.)  Essentially this leaves us in the same place — in a long wave waiting for a downwave. See our two previous letters.

Stay tuned we are about to do some predicting and forecasting — and that is always fun to watch –when himself goes out on the tightrope to do highwire comedy.

Readers should be  informed that there is a Wyckoff Workshop at Golden Gate University the 24th, 9-2pm.  Just show up if you want to attend.

Rest of the last letter…