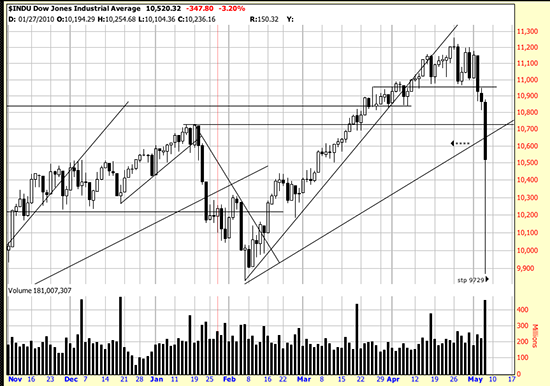 After watching the bungee markets (and being deceived by some of them) we learned that part of this day’s market action may have been caused by computer problems and part by a misplaced decimal point.  One story at least has it that a trader tried to sell $16 million of stocks and it got transmitted as $16 billion.  Whether these stories are true or not, who knows.  What is true that contrarians and short sellers managed to bomb the market as they have been wanting to do for some time.

For the last several weeks we have warning readers that a downwave was imminent.  We also pointed out that the apparently extreme stop of 9729 Dow was the system identified stop.  The chart above shows how the market reached for it.  And didn’t take it out.  (Remember, stops are close only, not market if touched.  Looking at the candlestick it should be obvious why stops are close only.)  Meanwhile the stop generated from Variant 2 (the asterisks) was taken out.  We warned that this could happen and pointed out again that wave lows are inherently more conservative.

Here is what is supposed to happen now.  Tomorrow should see an automatic bounce.  The days following that could well see an attempt to test the low.  Given that, apparently, the low was made on spurious grounds we would be surprised to see a real test of the low.  The lower shadow of the candlestick above was made in 20 minutes.  That could be the bounce already.

We expect to see some consolidation patterns here and then when it is clear the fire is out we will be adding on to our positions.

We are largely hedged as we pointed out several days ago.  We don’t recommend this for readers unless they are adroit traders — and we really think that it can be a fruitless procedure.

We tried to anticipate the market and gave up some of our position in C.  The market violated the stop in BAC and we sold it.  We lifted our hedge in GLD.

We think readers are best off observing all this with a raised eyebrow and waiting for the snakes to bite each other to death. They will.  Just sit tight and observe the stops.  If you don’t know where the stop is, ask us.

We feel a little guilty about all this.  The whole business was probably caused by our posting the PnF analysis of the S&P in which we cogitated  that the S&P would go to 1575.  We warned in that letter that downwaves on the way to 1575 were not predicted by that chart.  In fact a healthy downwave (this one may not be sufficient) is necessary to panic the general public, scare the average investor, make him cough up his positions.  This is in order that undeserving and unworthy investors should not profit from the ensuing bull market.

In all likelihood this downwave represents a buying opportunity — but it still has to be handled with care.

Italy, country of the renaissance — and Berlusconi