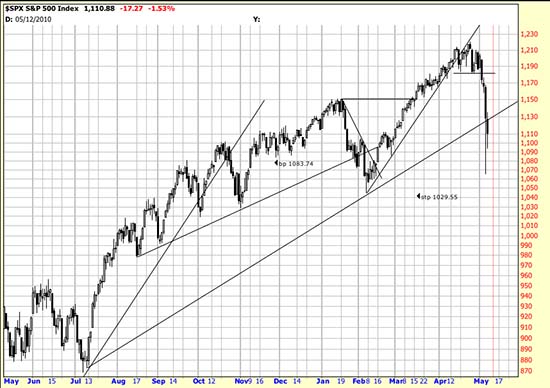 Here is the stop for the S&P.  It is equivalent to the Dow stop of 9729, and as can be seen is out of reach of even a black swan day — a black swan day which was essentially meaningless.  The market was looking for excuses and fastened on the Greek tragedy (or tragi-comedy).  Angela has managed to be teutonic for long enough to throw the fat in the fire.  Dumbkof.  It is unlikely that the markets would be in such a tizzy if she had not dithered so long to solve the Greek problem. 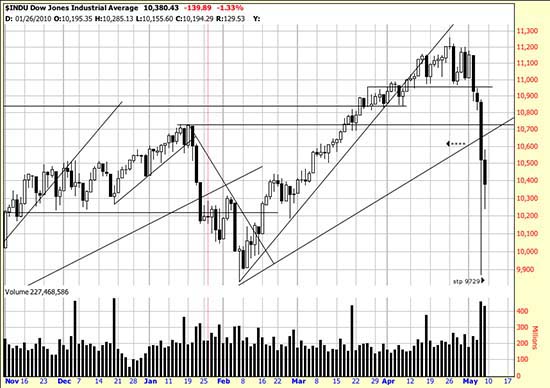 In the Dow the market reached (erroneously or not) for the stop, but market action had placed the stop at such a strategic place that it was unreachable.  This is because the Basing Point was back under the little rectangle in November.  No higher Basing Point was generated even to the present.

Now, in view of the fact that we just published an analysis that foresaw the S&P at 1565 we should point out that downwaves like this are necessary before the market can be taken up.  Otherwise the unworthy would participate in the bounty to be reaped on the upside.  As it is they will be properly frightened, hide in the bond funds and not reinvest in stocks until late in the bull market, furnishing the necessary fuel for the blow-off.  Their participation will be welcome at that point.

That way they will manage to lose two ways — when the bonds crash, and when the stocks crash.  The market is meant as a punishment machine for the crowd.

Not that we haven’t taken some punishment here ourselves.  Sometimes the long term strategy requires some strength of character.

As for our personal account we were stopped from BAC and some C.  Friday we liquidated our hedges at modest profits, and doubled up in the Qs.  This is probably a little early — there may be some more downside here.  If we think a pattern develops which is promising for our readers (we try to avoid suggesting risky strategies for our readers) we will comment on it.

At this point call premiums are probably through the roof and thus probably unprofitable.  But there may be individual issues sold off enough to be good buys.  Remember set stops under anything you buy at this point.  We will probably be buying more if there is further sharp action on the downside.  For the prudent reader we think waiting for the downwave to play itself out is advisable.  Our short euro and long gold and long dollar positions have benefited here.

We are examining some tactics for use the next time the volatilities are so low.  In the meantime we are preparing a dart board with a picture of Angela.

The law of gravity in the market…

Is that it? No. Not yet. But careful chart reading pays off.