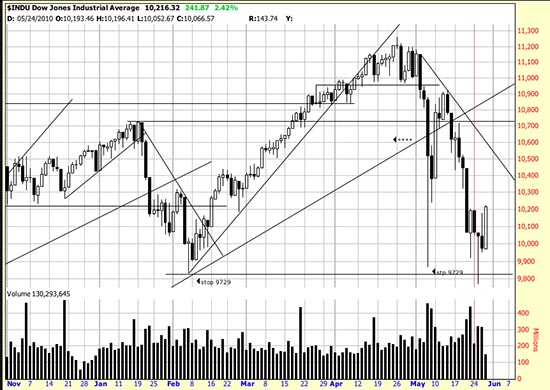 Yawn.  As Peggy Lee used to sing, Is that all there is?

Let’s make clear what is going on here.  Contrarians, bears, shorts are trying to take out the February low in order to raid the market — because if that low were taken out (and our stop not too far below it) real blood would flow.  As it is, painful (or astonishing) as it is, taking out the low would result in a serious bear market.  For the moment bulls are taking sell offs as  buying opportunities and frustrating contrarian efforts.  In fact there may be trading at both ends here by contrarians.  And today had to be painful for shorts.  You understand everyone is flying by the seat of his pants here.  There is no playbook or cookbook for what is going on here.  Naked knife fighting in the mud.  After two tries we got it right about the reversal day, but it doesn’t mean that tomorrow won’t be another bungee day.

Today however the market closed over 10200 — which looks to us like an important level.  Frankly though while we are long and anticipating further upside progress the only thing we would promise our readers is what Churchill promised the Britons in WWII — blood sweat and tears. 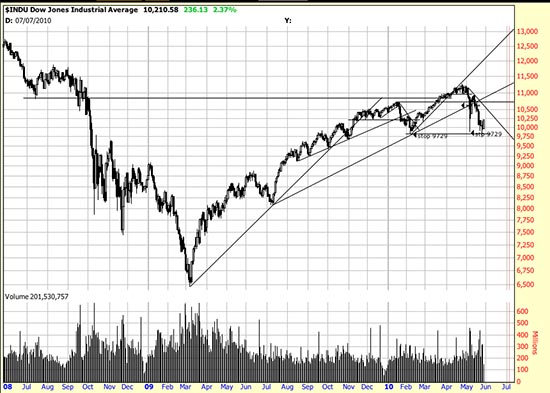 And there is still serious question of the broken trendline from July.  If we had it to do over we would probably put the Basing Point under February’s low, but when we established the Basing Point in December the market god was hiding February from us.  For purists there is even a recent Basing Point (find it if you can)  which gives a little higher stop, but the stop we have is good enough for government work — except in the Gulf.

The burning question (besides burning oil spill) is, Is this sell off sufficient punishment for the broken trendline? or are we going to be treated to some serious s/m on the downside?   Only Paul Farrell knows for sure.