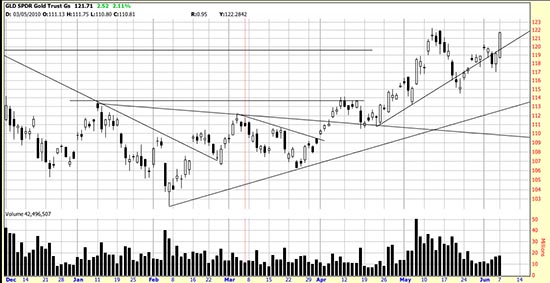 Actually, maybe it’s a gold lining.  While the Dow was deteriorating gold was contributing to account equity — as was silver.  Both could probably stand add-ons to the position.  You will remember our admonition about portfolio allocation:  increase commitments to profitable positions, decrease commitments to losing positions. 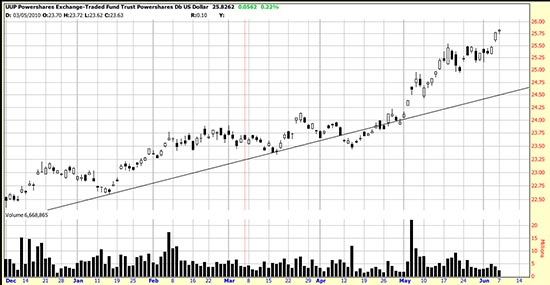 UUP, the dollar index also continued to contribute profits rather than sucking them away.  There is an ongoing lesson here in the value of diversity. 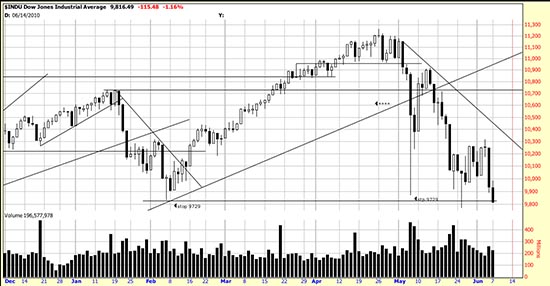 The Dow was unconstructive.  Perhaps destructive is the word.  We had thought that Friday’s plunge might experience the famous automatic bounce.  Not.  Today a gentle slide continued.  If tomorrow’s action is further deterioration we would begin hedging our positions even before the stop at 9729 is reached.  There is a nasty mood in the air (also smoke from burning oil) and the smell of burning tail feathers of politicians.  Also the smell of cowardice and fear amongst the Europeans.  In this little drama the Germans have played the role of BP in their mishandling of the Greek debt spill.  He (She) who hesitates exacerbates the situation.

We wish we had more hands than Shiva so we could point the fingers of blame in 360 degrees of direction, but we don’t so we’ll just have to point out what happened the last time investors didn’t have a stop on their positions.  (Vide March ’09.)