We should remember that the rats, playing musical ships, had an alternate ship when the the music stopped playing.   (We never met a mixed metaphor we didn’t like.)  We called attention to the VIX back in April, and we called attention to a week or so ago — before the eruption, actually.  Perhaps someone will jog our elbow next time and we will make the “whim trade”.  As it is there is some serious hedging going on in the VXX and the QID (Qs). 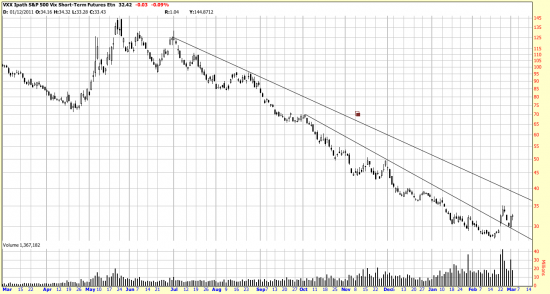 Note the exaggerated volume on the trendline break in VXX.  Clearly “smart money” is hedging. 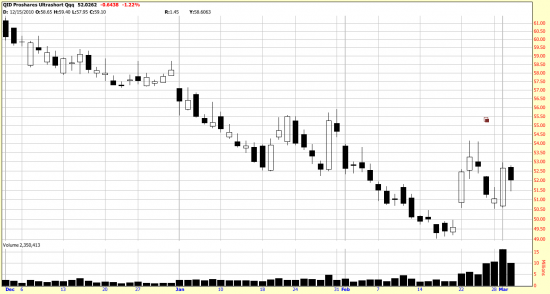 Hedging in a heavy manner is also going on in the QID, the short Q ETF.

What do we think of this?  Squeak Squeak.  Did some ourselves when we saw the ship taking on water.  Emphasize!  This is trading, not investing.  We think the likelihood of a major trend reversal here is about the same as the rumored wedding of Justin Bieber and Lady Gaga.  (ohmiallah, did we just start a rumor?)

Once again the readers who will win this skirmish will be those who refuse the provocation to play musical ships and mind their stops as determined by the Basing Points.

V bottom, turn on a dime…