When markets panic there are always “smart” traders who seize on the “oversold” situation to scrounge for bargains.  This is how B waves are formed.  C waves are formed when traders realize that they have bought a bull trap.  A B wave is being formed right now, very similar to those which formed in November of 2008.  We do not choose to stand in front of onrushing trains, so we liquidated our shorts and are now long — a trading position.  Readers who are not young, agile and aggressive should be  watching this with amused interest from the sidelines.    So should we.  Nonetheless…

Of interest — the rule of seven 3d target has been hit as noted on the chart.  Also of interest, check this : 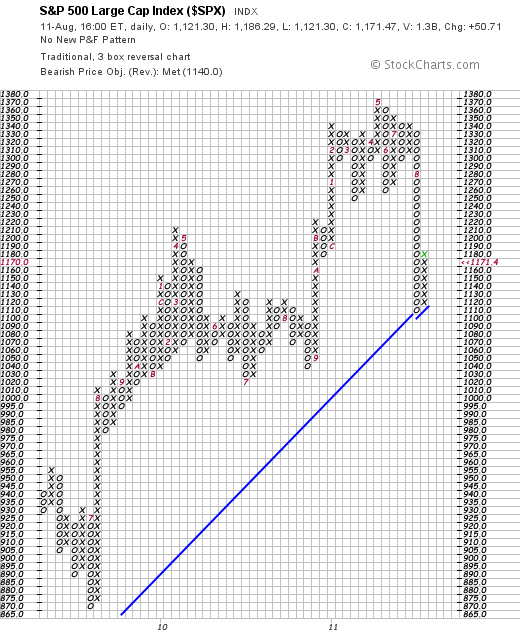 This bounce is taking place on the PnF Trendline, right around the stockcharts PnF  downside target.  The Wykoff calculated target has not been achieved. YET.  Nor has the 4th target of the rule of seven.  The market rhythm is so frenetic  that a day is about as long as a wave lasts.  This will change of course, and after the B wave plays itself out these targets are very likely to be achieved.  In general investors and traders should be short long term and pulling their hair out short term.

Note that the Dow Theory is short and so is the Magee Basing Points procedure.  Enjoy the drama.