We have a short time ago bought and remarked on the Qs.  Here is the story since March of 09.  That trendline, when broken (as in all the indices, created an airpocket into which the Qs were sucked, and then an extended sideways congestion.  As may be seen here prices have burst out of the congestion zone and are on a tear.  Much of this is owing to Apple which drives much of the tech index.  By many fundamental metrics Apple is undervalued, which may sound strange, but then fundamentalists are a strange bunch, religious or market.

Whenever prices sally forth from a formation like this it is worth assessing their prospects.  One classical method of course is measuring the depth of the formation and adding that number to the top of the formation.  The formation is just under 10 points deep, which would give us a target of 69.27. 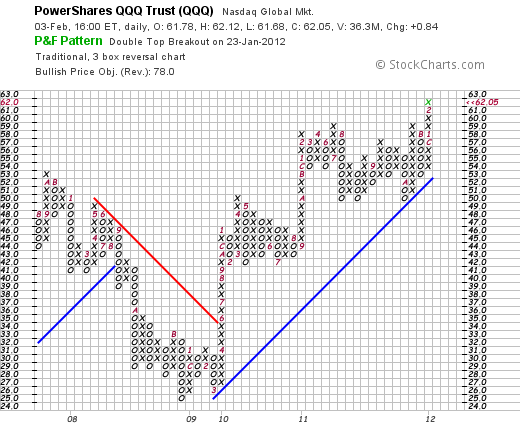 Stockcharts.com, using conventional point and figure technology,  looks for a target of 78.

Using the Wyckoff method we have explained before here we can also compute an eye-popping target of 101.  (17 wide x 3 reversal size x box size 1).  Once again, do we believe this?  Do you believe that we are total agnostics on these tools?  If not atheists, or anarchists or Kirkegaardists –or…but we digress.  We look at these things with a raised eyebrow and do what the chart tells us to do right now.  And if we reach the target we say, how about that!  Now, what is interesting is that a bunch of charts like this are showing up — leading one to believe that a bull market may be in the offing.  It doesn’t matter.  We have pointed out that the Magee Basing Point system has been long the markets since October.  We are now reaping the rewards of systematic investing and patience.

Now for the warning.  We are into 36 days on this wave, the longest wave since the August break.  And, (or but) today’s action is an add-on signal.  This frequently happens just before the correction.  Whatever.  The stop is so far away it might as well be in Patagonia.  (Or in the Caymans with with Mitt’s money.)  You can of course stop it up closer if you have ignored our letters and are just entering now.  Money management — say 5% from today’s low.  Or take the low of the 30th as a Basing Point 1326, plus 5%.

We remarked last week on our observance that the mood of the market had changed.  Reminds us of the time in ’85 when we remarked to our old boss and buddy Blair Hull that the volume had revived.  He said, “Get the nets.  The fish are back.”