The sell signal is clearly evident in TLT here –power bar on a downgap.  We have been watching it deteriorate for a couple of months with the downward bias becoming more and more noticeable.  Now the signal is in and we will be shorting it next week.

Once again we are not believers in forecasting, but the PnF chart, that unemotional forecaster of the runes, has a prediction. 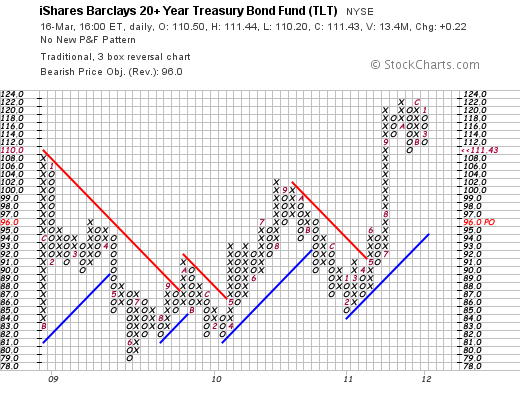 A target of 96 as yields tilt upwards.  Feasible?  Why not.  As seen here the price is very exposed — and overbought as a result of investors flocking to “safety”.  When the game changes there is no such thing as safety, except being short. 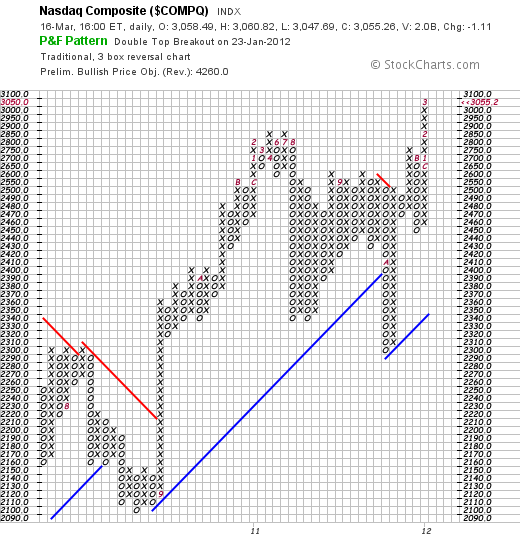 As a public service and as a linguistician let us make clear that the British have messed with our language again.  A British “muppet” is not an adorable green frog or hand puppet.  It is a turkey.  A lamb.  A sucker — or, in other words a client of Goldman.  We have watched with fascination as the financial press has killed the messenger — the Goldman executive who bolted the shop and unleashed a jeremiad against his former employee.  WSJ and Marketwatch, for openers, have called him a Judas.  We have no opinion — except this:  Expecting anyone on Wall Street to give you a break is equivalent to believing in the Tooth Fairy and Santa Claus.  This is bloody tooth and claw capitalism and the law of the jungle rules.  Readers will remember our aversion to the coming Facebook offering.

But we digress — seduced by the drama of the material.  Why do markets go crazy when the highs are taken out?  Because there is no resistance whatsoever when new highs are made.  Nothing.  Nada.  Nyet.  So prices are free to soar.  And they will. 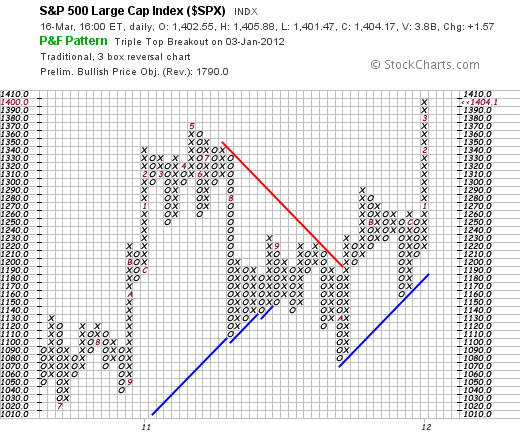 Here the stockcharts.com PnF routine is looking for 1790 in the SPX.    As we have warned previously these charts know from nothing about time.  But we do.  We’re looking — like Barron’s — at a couple of years.  Get the moon rockets ready.

Stranger and Stranger. Another huge day in the Dow. Test of Low?