You may not like what the French do, but they do it with such elan (and they pronounce it so beautifully) that you have to enjoy watching it.  And it used to be a hoot in the old days to watch the Greeks throw dishes–  if not watching the anarchists breaking bank windows. Being Keynesians we have watched with one eyebrow arched as the Germans have administered large doses of castor oil to those fun loving and sun loving Latin-Europeans.  Clearly they learned nothing from Keynes, and nothing from the Great Depression.  You can’t shrink your way out of a recession.  American investors hearing the Sirens have been throwing themselves on the rocks.  Of course this is all a tempest over a golden fleece.  But the markets, being moderately overbought seized it as a chance to play musical chairs, and big traders seized it as an opportunity to create and profit from some volatility.

We have said that to have a bull — or bear — market that the major indices had to be in alignment.  At present they are not, while being toppy and sideways.  The PnF charts are instructive, but not dispositive: 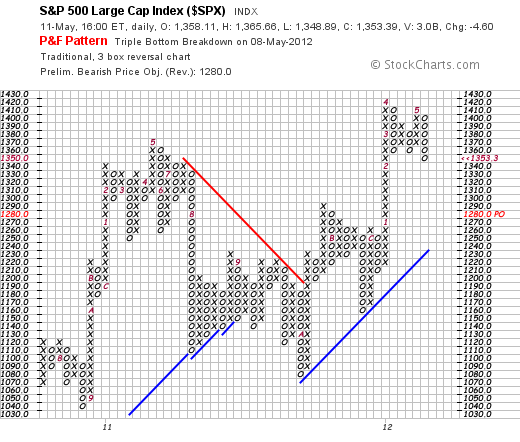 The systems thinks that 1280 is a reasonable objective and you could make a case for that from the bar charts as there is a toppy pattern and a short term downtrend. 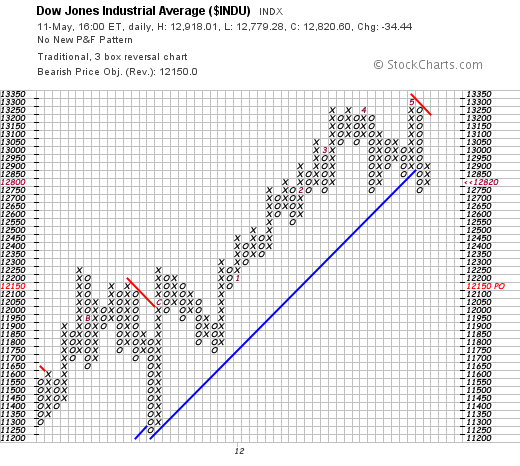 The sytem thinks 12150 is a reasonable target for the Industrials.  We don’t see a clear down signal in the industrial yet.

By contrast, The system is still bullish on the Qs: 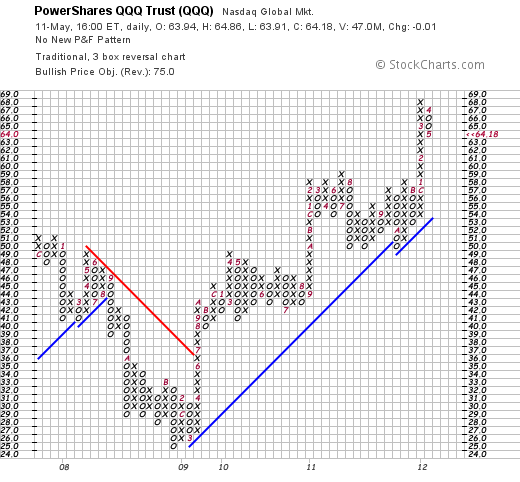 The system expects a price of 75 for the Qs — while there is a clear short downtrend on the bar charts.  What do we think?

Well we’re almost completely hedged in our personal accounts — a trading decision.  We also think that readers who adhere to our previously published Basing Point system stops will see this in time as unpleasant but not a major trend changer.  We have accounts where we are just long and have made no effort to hedge them.  Note that PnF charts have the same reliability as crystal balls and ouija boards and those secret incantations we mutter as we throw incense on the flames.  (Still much more reliable than fundamental analysis.)  The markets are singularly difficult to diagnose at present.

In the end this will be seen as an ideal opportunity to increase positions.  And we look at the markets every day and say, Now?

Bears on the prowl.