Traders seized the chance to sell a 6 day upwave and jumped on it Friday.  The usual suspects were rounded up to take the blame — as in the blame  stays mainly in Spain.  Nonetheless a new higher high was made — by the hair on the chinnychinchin of the market.  So the bull wave is intact at this moment.

Meantime two other promising issues are shaping up.  In the natural gas trade we previously discussed, BOIL, a leveraged etf,  has a very promising chart:

This is a classic double bottom.  The gas market has cast off so many false bottoms that one is inclined to be skeptical, but this one may be valid — at least worth a trade.  The stop is a mile away — the real systems stop is under the low of June, but one can always move it up to the low of July with a 5% filter, or even use a money management stop, or –somewhat more sophisticated — an average true range stop — in this case we would say probably 3 or 4 ATRs from the present low.  We remarked that great patience would be necessary in this trade.  If one gets happy feet — like quarterbacks under pressure —  you could get tossed around.  The breakout is not complete here, but is tradeable. 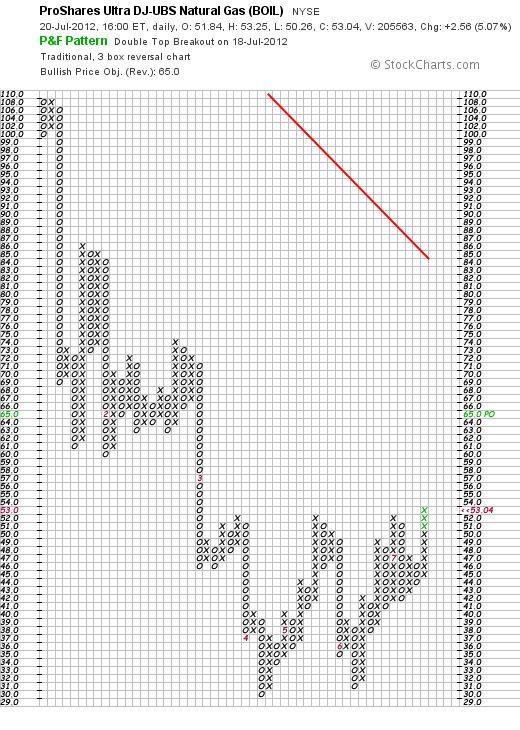 Talking heads daily blather about the euro is strong today yak yak yak while we look at the chart and say — what universe are they in?  Oh, yes, the unreality of daily TV drama. The chart has just cast off another sell signal with today’s action.

The euro is in  a major downtrend and pundit ignorance about it won’t change the facts on the chart.  We can change the universe and also our perceptions about the universe by ignoring these guys — or regarding  them as the clowns in the circus.