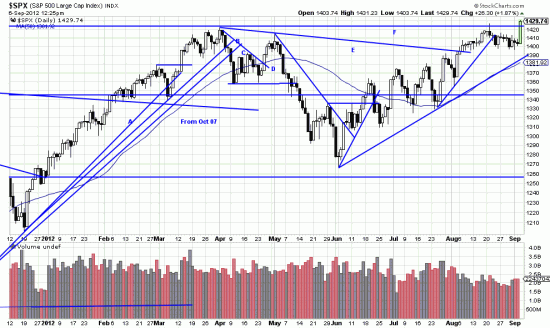 We often speak — half humorously — of power bars, which are, of course those candy bars bicyclists eat.  In our nomenclature a power bar is a bar that stands out from surrounding bars for it’s strength and length and position.  White on the upside, or black on the downside it is a sign of unusual strength or weakness and often serves by itself as a signal.  When it powers across a trendline it’s significance is magnified.  And its importance as a signal is magnified. We have observed that trends often start with an explosion.

Today the markets are exploding away from a little downwave and are taking out the previous nearby top marked by the horizontal trendline.  Aggressive traders respond to signals like this by increasing their commitments — position building (for Lutherans.  Pyramiding for Anglicans.  Gambling for Baptists.).   We have had a hedge on during this little downwave and will be lifting some or all of it.  Sometimes we feel like Charlie Brown kicking Lucy’s football, as we keep reading the charts and signals over the past year have been so treacherous — but if you have a system — methodology — which has been effective for years you have to keep doing it until Lucy misses her timing and you get revenge — sweet revenge — in spades.

In the movie Crocodile Dundee Crocodile is confronted on a New York street by a thug with a knife.  Undaunted he reaches to his back scabbard and pulls out an Australian Bowie knife (a big damned knife) and says of the thug’s knife, “That’s not a knife” and flourishing his own says, “Now that’s a knife.”  Thug flees.

Fear and uncertainty… markets for traders and squirrels