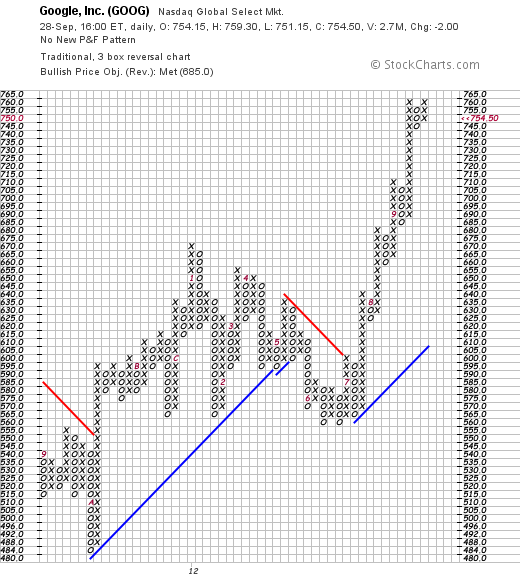 We habitually check in with Marketwatch to survey the news and see a snapshot of the market.  It is also an antidote to low blood pressure.  While occasionally interesting  Marketwatch features columnists who essentially propagate intellectual pollution.  There is, as all readers know, a breed of financial writer who desperately tries to attract attention by making wild predictions  — bullish or bearish.  This week it’s the “Apple– the next great short” to get attention.  Of course shorting Apple is the height of foolishness and breaks one of our most important tenets:  Never short a bull trend.  The market has an axiom on this subject:  Don’t fight the tape.

There is a strain of madness that runs through traders — To mitigate the regret they feel at having missed a significant trend they try to forecast the top hoping to catch the big downwave that often follows huge trends (see 2008-2009).  Or, on the other side see trader attempts to time the end of the natural gas bear market (excuse us while we wipe a little egg off our own face — just enough for a small omelet, fortunately).    Part of this has to do with the streak of contrariness (or orneyness) that runs through traders and part has to do with a deep held philosophical belief that prices always revert to the mean.  (Sometimes they do.  Sometimes they don’t.)

Readers will remember  that two letters ago we dealt with the Apple market, laying down stops and criteria for selling Apple.  Now let us deal with google.  google is much more vulnerable than Apple.  As the PnF chart indicates google has met its target objectives.  That doesn’t doom it by any means, but looking at the candle chart we see a wave of about 55 days, or 35% m/l.  It is the slope of this wave that is concerning.  And the fact that it is virtually a straight line march, without downwave or correction.

The wave low Basing Point is so far away (562.09) that it’s like a trip to Mars.  Meaning that google should be held for the long run.  But if you wanted to insulate yourself from the inevitable correction here you could use the low of the high as a Basing Point which would put a 5% filter stop at 710.27.  That is a trend stop.  A blow-off stop would be to take the three day low as a stop, moving it up constantly.  This doesn’t really look like a blow off to us.  It actually looks like animal spirits reacting to the extensive base that was built up over the past year.  We still think that google is a great long term investment, so one thing you can do is nothing.    Then of course there are always puts.

Or maybe it’s just google kicking up its heels at the map-mess at Apple.  Whatever it is if you are long google be prepared for a reaction here and decide what you are going to do so you don’t have to make it up as it occurs.