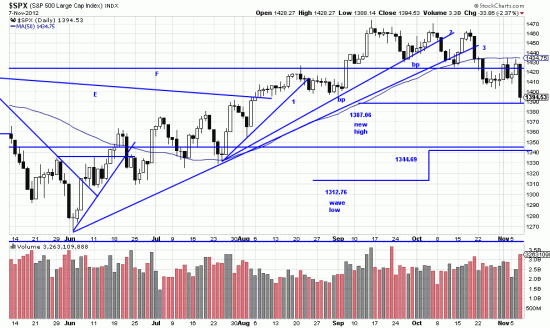 We barely realized the ominous portent of our last letter, titled “The eye of the hurricane”.   We were troubled  by the pattern but speculated that the stutter step might be the end of the downwave.  When we got a couple of power bars up we thought that marked the wave end.  Wrong. We kept looking for a fulfillment of the break of the trendline and trying to psych out  the pattern.

Instead of a wave end, as we see today, there is probably an alpha-beta-gamma-zeta pattern.  A letter on this pattern will be published shortly (very shortly).

As for the E&M account we bailed on our metals positions because the downgap was covered so quickly.  We partially unhedged some of our index positions yesterday and rehedged them on today’s hard sell off.  As is obvious prices are quite close to the near stop calculated from the new highs.  We think that the wise thing to do is begin hedging (in tranches — perhaps three to four) if prices close below the stop line.

As far as that goes we think the fiscal cliff is a red herring — or an orange pot hole.

i before e except after c because you get a thumb in your eye. sell C