Of musical interest, Brazilian artist Carlinhos Brown’s album, Alphabetagammizado is one of the great classics of drumming and  infectious rhythms.  Stocks have rhythms too, and here, lethargic with turkey and cranberries, we see that old island Friday displaying the holiday phenomenon, the sneak attack by the traders who didn’t go to the Hamptons or Bermuda for the holiday.

The pattern we call alpha-beta-gamma-zeta bears resemblance to the classic Elliott wave A-B-C pattern, but is more precise in finding entry points after a downwave.  As the z wave shows power crossing the downtrend line a relatively low risk entry point is created.

Here is the long view: 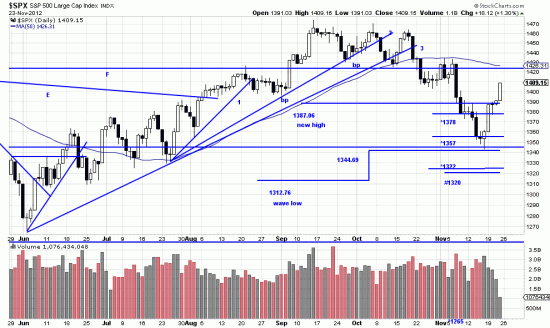 Lending some credibility to the analysis we see that the wave reached the second target of the rule of seven, prices often reversing at targets.

Accordingly we will be liquidating the last of our hedges next week (Allah willing and Congress cooperating).

We show the next chart with some hesitation.  It looks like Bernie Madoff’s equity curve and we all know how that ended.

It is Bill Gross’s (of Pimco fame) ETF.

If you believe in portfolio diversity, as we do, then bonds should play a role.  And the trend here is a contrarian’s delight–given that the bonds have to fall apart like snowmen in Miami (but no one knows when) and the trend is so strong the suicidal (contrarians) want to short charts like this.

The technique for entering markets like this is to divide your capital commitment into five tranches and stick your toe in, with a well chosen stop. If it continues behaving you commit other tranches to the campaign.  From the chart it looks like a modest correction may be in  process.  Observing that closely might permit a low risk entry.  We will continue following it.  But won’t be investing in it ourselves.  A reasonable money management stop would, here, be 109.25.

Now that the mud wrestling of the election is over the holidays begin.  SAn Francisco Opera will play Tosca, Stanford will play UCLA and Notre Dame will play USC.  The fun begins.

All the arrows point in different ways…what’s it mean? What price glory?

Had enough already? Say uncle or we’ll hit you again.