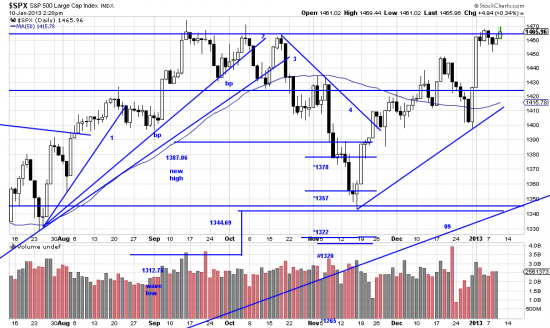 Actually, nothing strange about this chart, except that it  pictures a rocket lift off, 64 points in two days — 90% updays.  As we often take extreme powerbars like these to be signals the bullish tint of the market is reinforced.  And the sideways drift since?  Never prediagnose a pattern the master said….but… If that is a flag forming then the target here would be 1526.  Which brings in some other considerations — that a flag could be the end of the wave.  But — plenty of time to worry about that later. Right now the way to be is long.  And we’re all in as they say.

Strange chart may be a misnomer, but there is certainly an interesting chart since Mar 09:

This could turn out to be an extremely important chart.  Since Mar 09 the market has surged up in, as marked here, 4 waves, each succeeding wave of lesser power and amplitude.  The weaker latter waves are playing hop-scotch with the most important trendline in the market right now– that originating in Mar 09.  The piercing of this trendline will be a major major event and will require major portfolio adjustments.  It is a virtual certainty that the line will be broken.

Now that we have your attention —we will be addressing this subject in coming letters.

Volatility reverts to the mean…with a vengeance…