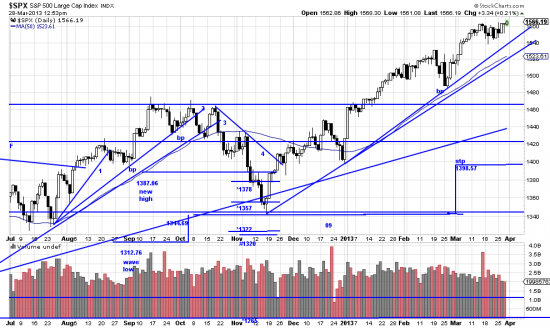 The title is just a bit of cheap irony.  As we say occasionally, the cynicism on this site is so cheap that minimum wage workers can afford it.  But not as cheap still as the cynicism of the AMR exec who wants $20M as a going away present.  (You could throw up over CEO compensation, and especially AMR compensation.  But that might damage your keyboard, so go do it in the sink.)

But enough of cheap cynicism –the reason we called you here was to point out what’s going on — namely a very orderly market composed of short upwaves,  and modest consolidations.  Prices are sited well above the trendlines and it looks like the Easter Bunny will be bringing chocolate eggs to all little investors and traders.  (Don’t believe this — if you start believing things the next thing you know you’ll be gunning down Republicans -=- or Democrats according to your engrained beliefs.)  Feel free to substitute Shiites or Sunnis.  We digress again.  Digressing on the way to the egress is one of our besetting sins.

Sorry.  We lost the link to this chart.  But you can see how the waves are moving smoothly up with minor down waves  controlling speed, and at the end a sideways consolidation.  The uppermost trendline is the tripwire.  Break that and we get happy feet.

This is shown a little better in the industrials:

The great trend in the INDU — Mar 09 to present