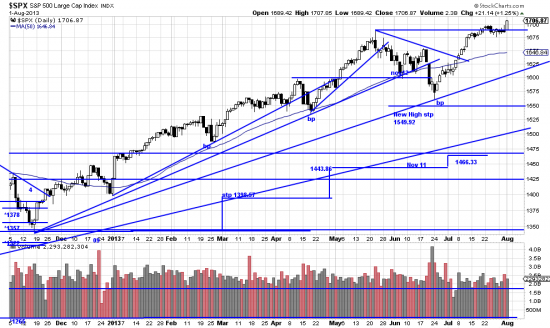 Our traditional chart which shows a longer term look at the market with stairstop lines and long term trendlines.  As we have been saying the market was not in a position to crash, and while that can change with a few weeks of price erosion the trend has tended to continue, and, now at new highs looks likely to continue some more.

Today’s power bar puts paid to the drift of the last week or so.   With an exclamation point.   But bears will not go gently into that good night.  They’ll go kicking and clawing.  Nevertheless if you wanted to add on here you would be perfectly justified.  We have already added on a couple of times on this longer wave, and might do so again.

This is really all textbook.  The long trend, the bear attack to bring it down in June.  The A-B-G-Z wavelets.  The June attack also was intended to inhibit any late arrivals — you need to shake the market a bit before taking it up.  The ones you shake out will be angry and frustrated and after awhile will attempt to reenter.  More fuel for the fire.

We sold our small gold and silver positions.  No followthrough.  There was followthrough in the bonds, so we added to our short position. (TBT) 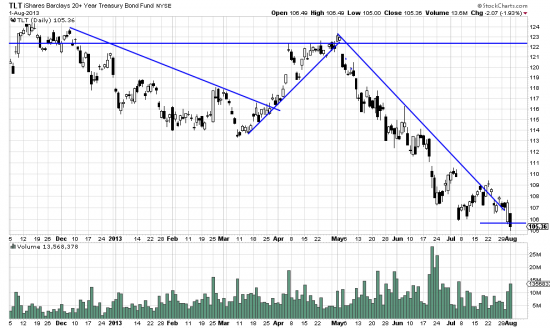 As you can see TLT made a new low.  Reason enough for us.

We also shorted the euro.

We won’t try to explain this trade.  Our explanation would descend into gibberish anyway.  Call it pique for not having caught the upwave. This is what we sometimes call a no-signal trade.

Readers who have followed along and invested on our readings should be sitting on piles of profits right now.  Our SPX position shows open profits of 75%.  (That’s in the leveraged ETF, UPRO.)  Remember, it doesn’t really belong to you until you quit.  And why quit when you’re having so much fun.