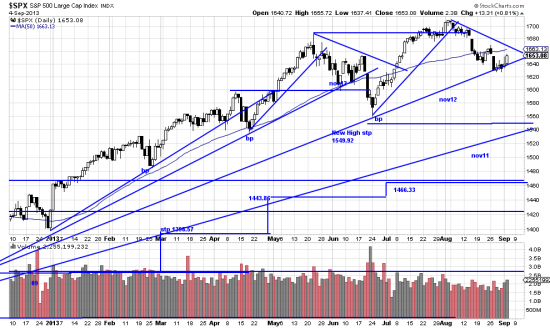 While waiting for the other boot to drop in Syria the market made every effort to fulfill its mission in life:  Cause the maximum amount of pain to the maximum number of people.  Volatility is the main tool of the market in this mission.  General investors react to volatility by fleeing or refusing to participate.  Thus, later, the market will be able to cause them the pain of having missed the next big wave.  As much pain is caused by the wave missed as the wave caught.  Perhaps more.  As in, DOH!  How stupid could I have been?

Having a methodology and the discipline to follow it allow one to deal with these periods of uncertainty.  In this case the important  trendlines are from nov11, nov12 and mar09.  The mar09 line is so far away it doesn’t show on this chart.  The nov11 line is also distant and even below the newhigh stop line.  The nov12 line appears to have acted as a trampoline today and vaulted prices upward.  We often think that these mini explosions incite waves and that is what we think here — that a bottom is marked to the downwave and we should start to see some signs of recovery.

By the same token with Syria looming and a new naked mud fight in prospect for raising the debt ceiling it behooves us to keep alert to 360 degrees of mischief.  As for Syria, dropping a few cruise missiles on  a despicable  butcher would probably provoke some short term volatility to the downside and then an upwave of relief.

The bear eats a bull or two…

Is everything too good?