Lest we forget–12 years ago the World Trade Center was destroyed in a despicable  surprise attack by religious fanatics.  The world will never be the same, and neither will we.  Perhaps the mantra of the Dali Lama is the only appropriate response: OM MANI PADMA HUM…OM…. 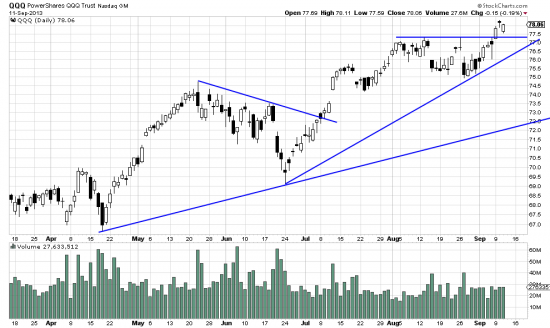 Although it’s not spring the market is showing some faint signs of life.  The Qs have popped out of  a little congestion zone and are buyable.  There are some drag effects from Apple over the short term but we think these should be easily overcome and we also think that Apple will be an impulsive force when it comes back in fashion.  (And it will.)  The stop is 73.90.

A bit more speculative, but an interesting flyer is the Japan ETF.

We are inclined to be optimistic about Japan.  The ETF has just broken the A-B-G-Z line.  This is more in the manner of a speculation.  It would be more conservative to wait for the piercing of the May and July highs, but what-the-hey the risk is easy to see.  Just under the island reversal (a positive formation) at 10.62.  We will be taking scale in positions in these two tomorrow given the continuance of favorable conditions.

There do seem to be some favorable signs the last few days.  Don’t try to figure out why.  Madame Market is not so easy to psyche out.

A note for technocrat neos