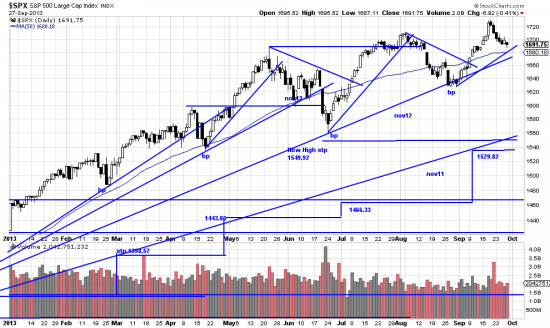 If this picture looks familiar, it’s because it is familiar.  There is nothing to be said about the market that has not already been said.  But don’t worry we’ll find something.  But it has less to do with the market than with the lamentable state of the nation.

With jihadists running rampant in the  Congress the only thing to do is play defense.  Fortunately for readers who might be in a state of anxiety the defense is already in place.  Namely  solid well constructed stops as illustrated here.  Remember, stops are close only, meaning that if the market takes a deep excursion and recovers (which is the most probable case) you won’t be stopped out by game players.  Obviously there is no way of knowing what the market will do if the Shiites shut down the government.  Except the last time this destructive game was played the market looked like a black swan doing a swan dive.  For long term readers the only thing to be done is watch the football games.  Traders will be hedged, as we are.

We closed our TBT position.  We had 16% profits until the last little run up, and left with about 6%.  That is what trend following is about.  Sometimes it makes us grind our teeth too.  But bonds are another bomb waiting to explode (down).  We’ll be getting short again at the first signal.

What a country we live in.  Mark Twain said: ” Americans are by nature an open gregarious and honest sort of people, and our only native breed of criminal is the congressman.”