“gall, brazen nerve, effrontery, incredible ‘guts,’ presumption plus arrogance such as no other word and no other language can do justice to.”

Twitter where is thy sting?  And could we be referring to anything other than Twitter?  Twitter is a pig in a poke and a monumental example of chutspah.  (In the pejorative sense.)

Not one cent of earnings and the three card monte specialists will do you a favor and sell it to you at a valuation of $11B.  There should be a law against it, but that’s wall street — Wall Street , of course, is a machine for transferring your money to the hucksters. 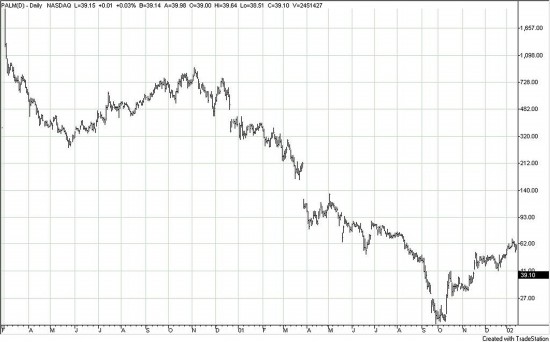 (no link, sorry)  (but appears in Zen Simple Beat the Market with a Ruler (Amazon))

An object lesson in IPOs.  Pal blew off on IPO day (partly due to laddering) (Laddering dear reader was the clever Wall Street custom of  handing out stock at IPO prices to favored cleints, with the understanding that they would buy more stock at higher prices on IPO day.  Known among mining engineers as “salting the mine”.

We don’t have a perfect record on IPOs.  Offended by the red herring price on google ($183 as we remember) we passed on the still outrageous IPO price of $85.  We could have bought it later but… mox nicht.  Or meh.  The truth is we don’t like individual stocks.  We like averages or aggregations of stocks –ETFs.  Individual stocks is too much like horse handicapping to us.  So you hit a homerun.  How do you know which one is going to clear the fence?  Palm?

We will post a less incensed letter later this weekend.