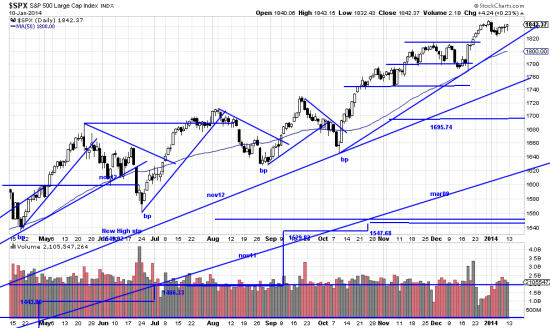 Sometimes the market — like a cat playing with its food (mouse) — lulls everyone to sleep and then rises up and devours napping investors.  Our readers, who have stops should never be devoured.  They might lose a little flesh but that’s part of the game.

Since late October the SPX has manifested two periods of consolidation — 12 days from late October and subsequently 24 days — 36 days in all.  The effect of this is to put everyone to sleep with boredom.  Used to be a soi-disant guru,  Werner Erhard who proclaimed that boredom was a high space.  Werner had to high tail it out of the country with the sheriff in pursuit — neither here nor there  (there was Costa Rica).  In this case we point out that sidewaves have the same effect with less pain as downwaves.  That is, they let off some steam from the market and prepare it for further advance.  So what is happening  here is actually constructive.

Adding on to the position here at this moment is not conservative.  Good practice says that you wait for the breakout.  It might appear that the breakout occurred on the power bar (the day the Fed tapered, or jawboned about tapering).    But instead of follow through we got more  consolidation.  We will wait for further strength before adding on.  Partially this is observance of good practice, and partially suspicion about what the major players in the market may be up to.  The bears and contrarians are very frustrated that they have not been able to create more volatility and a down wave and they will pounce at the first event or news which serves their purpose.

They are facing a losing battle.  The bull market is still on, with even more extreme targets.