The galaxy of interest rates appears to be entering a new phase in a galaxy far far away…  We have closed our shorts on the long terms, TLT. and now it appears that the issue is headed upwards.    Against all economic reality, we might add.  Is there in this cosmos a being who believes that lower interest rates are possible?  Perhaps if we suffer  a deflationary implosion, but otherwise we  still believe (or adhere to, since belief is something which doesn’t occur in our religious system) the analysis we have published several times here that a massive 24 month top has formed and the devil (or Pat Roberts) is to pay.  Here’s the chart again:

The fact that long term trendlines are broken doesn’t harm this analysis.  But let us look at the present situation and determine whether a position should be held here.

Here downtrend lines of  up to 9 months are broken, just as prices are finding the neckline (a source of some support).

A closer look shows prices breaking from the congestion zone (or rectangle). 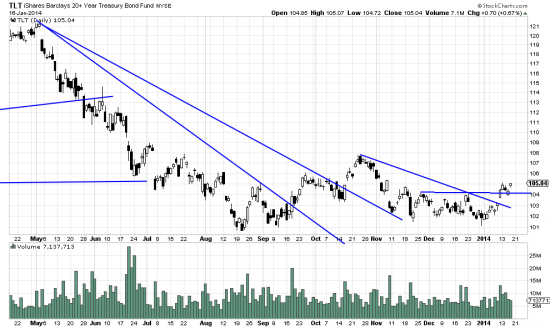 We are not going to buy TLT because of our  economic and long term analysis.  Readers must make that decision for themselves.  Given the continuing gnarly state of the economy the Fed may start a new campaign to drive interest rates lower (and bond prices higher).  We will watch with interest but no skin in the game.  Not only is TLT  acting up, the market acts like Muni bonds are no longer the kiss of death and MUB has cast off a buy signal.  We’re not buying this one either, but without prejudice. 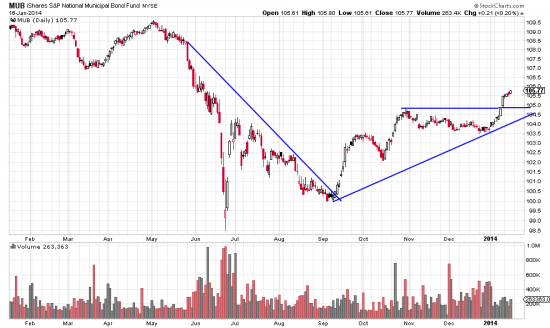 Meanwhile in the broad market the short term trendline from Oct 13 is chasing prices and it looks as if they could collide which might bring about the market correction the pundits have been so eagerly desiring for a year or so.  We will be hedging if this occurs. 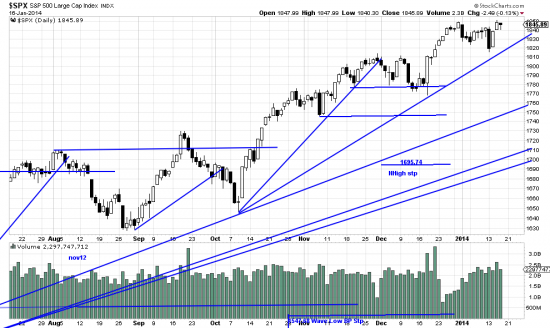 Breaking away? or breaking backs?