Recently the media and the punditry have been pumping gas into a specious bubble.  We show here the graphic they are using to gain attention and incite fear and confusion into investors.  They are saying that the behavior of the market at present is analgous to that of the market in 1929.  Ohhh–scary. 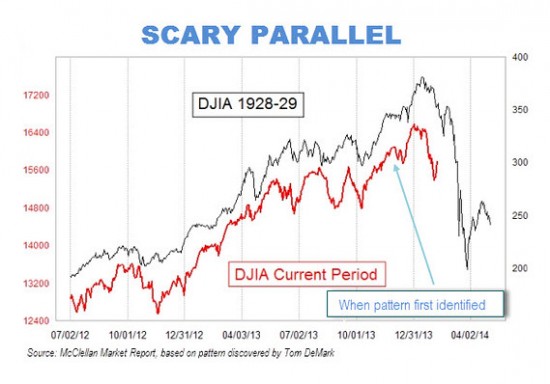 What’s in it for the Chicken Littles running around clucking furiously?  Publicity.   Hype.  Attention.  Money. Fame if by some happenstance the market should crash.

One analyst partially deflated this bubble by published a chart which put the situation in proper perspective.  The original chart has two scales, left and right.  The left, for the present market is 50% and the right for 1929 is 100%.  Oh.  Really. 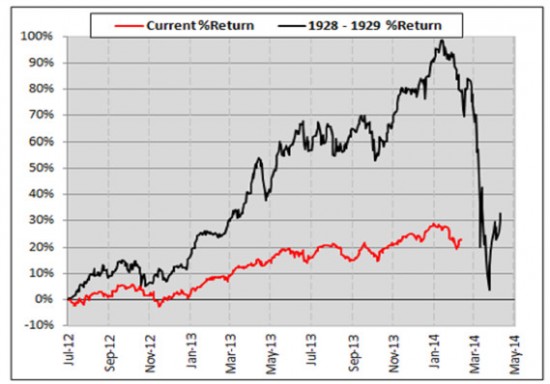 (Mislaid source of this.  Will attempt to search it out.  Probably Hulbert at Marketwatch.)

Now let us get down to the deep philosophical examination of analogues:  We have never once in our long career made a dime off an analogue.  Believing in analogues distracts from the first principle of zen:  be here now.  These chimeras and fabulas are best dissipated by reattaching oneself to reality.  In other words analyze the present chart.  Is the market going parabolic?  Is it in runaway mode?  Are morons making fortunes?   Is there a top pattern in evidence?  Are the long term trendlines being broken?  Are the pundits hyping Dow 36000?

But what about Soros doubling his bear bet on the S&P to $1.3 Billion?  Well have you heard the story about the Pentacostal preacher who  was a snake handler?  Was.

How high do they go before they hit bottom? Interest rates — not politicians.

Waiting for confirmation … or Godot