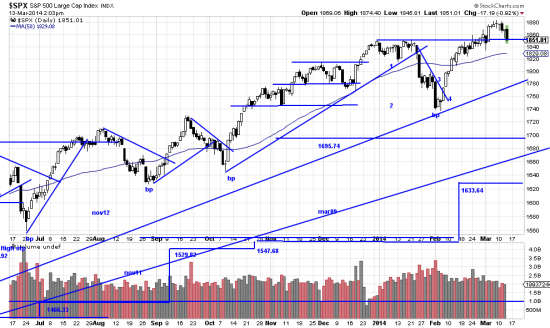 Mr Chicken we’ve seen you before.  In fact every time we make a new high the chicken fanciers hammer the market.  We can understand this — what with Joe Stalin Putin acting semi-tough in Ukraine and the Crimeans trying to erase memories of the Light Brigade and the Chinese also acting semi-tough about their economy and George Soros predicting the end of the EU and … OMG there’s a lot of stuff falling out of the sky out there –maybe they are right… NOT.  It’s just chickens being obnoxious and short term traders making money off volatility.  Tedious, but that’s the state of the markets right now.

Fasten your seat belts, smile bravely and know that this is just chickens behaving badly.

Or sit down and have a cuppa joe.  Invest in the world’s most addictive drug.  JO.

Five years of coffee, JO.  This is not a bowl of cherries.  As you will see from the next chart there is a big stop on it — meaning high risk.  We will be watching it closely so if we see signs of collapse before the stop is hit we’ll be yelling the coffee is falling the coffee is falling…  We are putting on an initial small unit to prove our heart is in the right place.  Don’t do this unless you are willing to gaily sacrifice up to the stop.  And we mean casually. 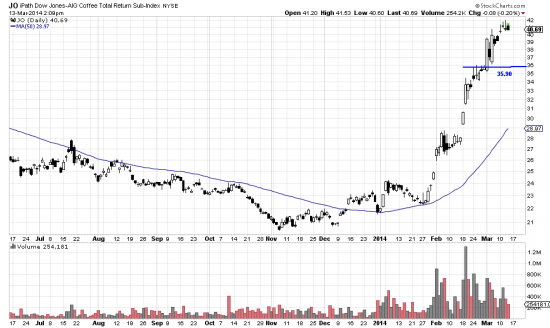 i before e except after c because you get a thumb in your eye. sell C