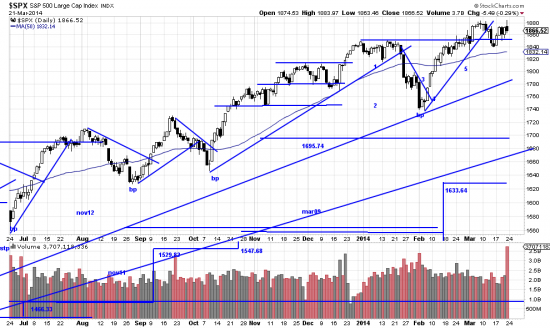 The last volume bar here is ominous.  Volume spikes like this sometimes mark the beginning of a wave, and sometimes the end of a wave.  And sometimes a significant inflexion point.  It strikes us that it is in a strange place in the pattern, so we will have to wait until next week to see what the market tells us.  Friday itself was on the strange side.  The preponderance of volume was registered early in the day when prices ran up and made the high.  The rest of the day was spent slipping down the wall of worry.  It does not help that the day by some interpretations is a reversal day.

We never look for confirmation of our analysis or conclusions from talking heads or pundits — or even from analysts whose work we respect.  In fact when everybody is singing the same tune our impulse is to scratch on the blackboard to hurt everybody’s ears.  But it is worth noting that there is a lot of verbal beating of the bull drum lately.  So let us address the likelihood of a painful correction — say 10-16%.  It is only a matter of time until this pullback is upon us.  So readers should begin thinking of how they will handle this.  We don’t think this “correction” will change the major trend, so at the moment we would say you could grit your teeth and bear it, because a robust recovery and resumption of the uptrend will occur.  And the downwave will present an ideal add on opportunity. We will be addressing this situation in imminent letters.

Charles Schwab has recently released a document to its clients (we have family accounts there) which we display here.  It  analyzes the advent of corrections during mid-term election years and the behavior of the market after the correction.  It speaks for itself.

TLTed. End of the wave in bonds?

Heads and shoulders–upside down, or Kilroys