We have been struggling with the gold chart for hours and hours trying to understand what we are seeing.  We have  been bearish on gold for some time and even made a rule of seven analysis which looked for a price of 880.  We just closed  a GLD short — minimal loss– and a short miners (DUST) (about 15% profit).  Now we are wondering if that was a bear trap.  If so we still have all our toes.  But our faith in the past analysis has been shaken by a lengthy reappraisal of the entire relevant chart.

GLD has been struggling for months to mount an offensive  –(numbers 2 and 3).  Meanwhile the long term trendline at 1 looks to be reaching a conclusion.  We may well have a double bottom of some consequence here.  A moderately aggressive trade signal occurs when line 1 is penetrated.  The conservative trade occurs when the line at 4 is broken.  Wild eyed speculation buys a small position now.

Here is another look at it:

Weekly chart, for a little sharper view.  For what it’s worth the PnF method looks for a price of 166 in GLD.  We confess to large conflicts around gold.  It is a bastard  issue ruled exclusively by emotion.  It has no fundamentals, no earnings, no dividends, no rational as   an issue beyond its putative role as  a “safety haven” or “store of value”.  And there is nothing that stokes the cockles of the heart like running your hands through a cache of Krugerrands.

From this point is is also possible that instead of a new uptrend we will see an extended sidewave.  If prices  broke below the previous lows we would get short again.  In the meantime we are going to sigh and  take a small position. 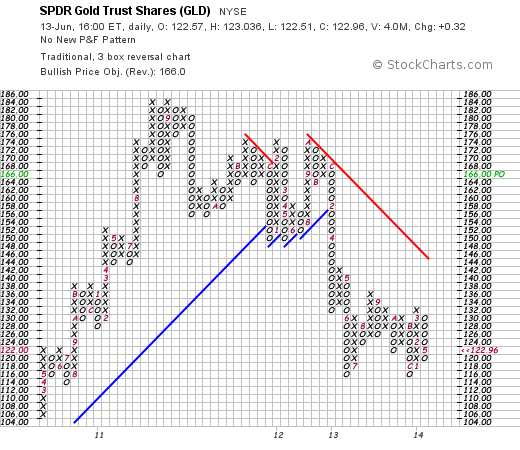 We think these comments apply to silver also. INDL the Indian (not redskins, Indian Indian) ETF  is buyable.  And probably not a bad idea.

Meantime in the indices the break out and run up has now run 17 daysl ad traders used the mess in Iraq as an excuse to  book some profits and knock the market down a little.  So nothing more than a glitch.  We still wouldn’t be adding on as the wave looks vulnerable to us.  But we wouldn’t be scaling out either.

uup and down and round and round…