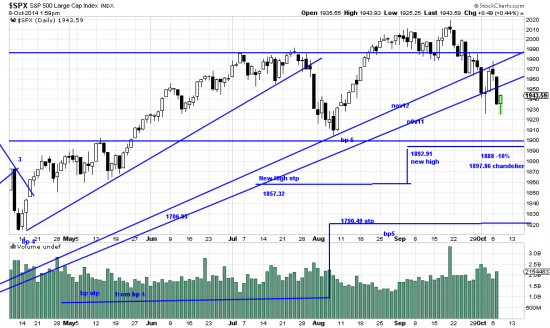 The market has been hammered repeatedly over the last 10 days or so, so naturally the WSJ, attempting to explain the unexplainable, attributes it to fear  that global growth is stalling.  Actually they would have done better to attribute it to the eclipse of the moon, or the eclipse of the Nationals.  Articles like this are written by the market’s disinformation committee to keep non-professional traders from understanding what is going on.

What is going on (and it is more serious than global non-growth) is the penetration of the nov12 and nov11 trendlines.  Why has this occurred readers ask piteously.  Well, the answer is somewhat like the answer to why the moon was eclipsed.  And! It doesn’t matter why, and knowing why is the booby prize anyway.  Magee addressed this question in The General Semantics of Wall Street.  If metaphysics interests you get a copy.

Meanwhile wrestle with the problems of broken trendlines.  We think it is entirely possible that we could see a 10% downwave here.  We marked it on the chart, just under the New High stop line at 1888.  That said we think the New High stop there at 1892 is too tight but readers have to determine individually how much pain they want to endure.  We also marked another stop point used by technicians at 1897.86.  This is called a chandelier stop as in what we will be swinging from if the Giants win it all.  Calculated by taking the recent important high and using a 5 or 6% filter.  As is obvious a number of techniques have placed the stop in the same area adding strength to the analysis.

Still in our method we never worry about being ejected.  Reentry is easy for a moderately bold technician.  We do think that the present downtrend is the prelude and preparation for the next big leg of the bull market.  And–we are basically hedged now, long a few UPRO and long the inverse (bear) SPXU.  Also, short the euro, the Russell 2000 and silver.   Might get short gold here soon.

Meanwhile, take me out to the ball game.  And you too.

Ahmed’s dilemma, and the anlyst’s conundrum…