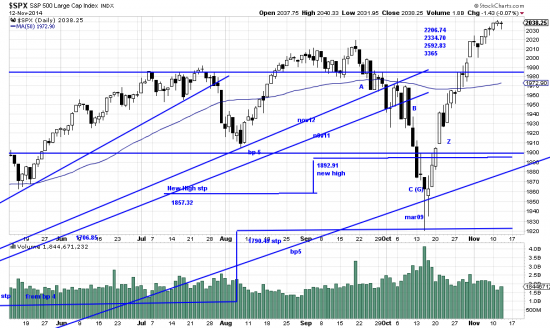 As the official potifex maximus of the rule of seven mystery we looked at the recent wave and came to the conclusion that we are at the beginning, not the end.  This is occasioned by the sell-off of October.  When the technician detects the beginning of a new wave he may  attempt to gauge the eventual target of the wave by applying the rule of seven (http://www.edwards-magee.com/ggu/ruleofseven.pdf ).

The resulting computations in this case might lend one to a comet interpretation.  We have noted the targets on the chart:  1. 2206.74.  2. 2334.70.  3. 2592.83.  4. 3365.  Usually we don’t compute the 4th target as it appears so fanciful and anyway is guaranteed to be far off.  We think the 3365 is somewhat like targets generated by the point and figure method.  It will probably occur but like the European comet venture  (which has taken 10 years)  it will be a while.  Anyway we don’t invest or trade on the basis of predictions or crystal balls or sunspots or whatever Goldman says.  Our operations are based on the chart right now.  And that says the trend is intact.  The rule gives us targets which are possibly inflammatory.  So the reader might like to look at some previous instances when we applied the rule.

Readers may thrash through our archives where many letters like this will be found.

As we were saying…

Words from the wise