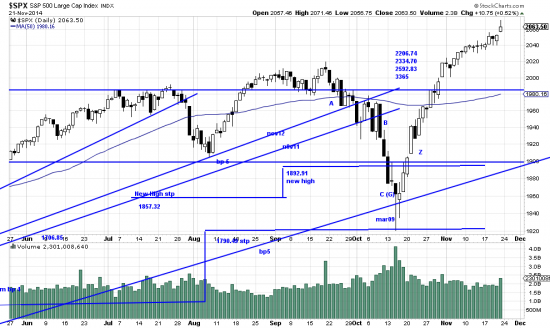 The market got over excited with news of Chinese and European stimulation programs and blasted off until contrarians and day traders  heard about the opening exuberance and jumped on the  market and beat the daylights out of it.  This is what happens when blatant moves occur in the market.  No brainer.  Nonetheless  a new high was made, but of questionable value, looking at the pattern, which looks like a reversal day.  We anticipate more sideways action.  A few days ago the TSAASF held a little amusing contest and asked members to predict the SPX as of our annual Xmas party Dec 11 (TSAASF.org –open to everyone) and we theorized that action here would look like the sideways movements  which followed the last two upwaves (July, Sep).  It is after all Thanksgiving coming up and then Xmas.  We entered a prediction of 2059.   This is just a harmless amusement and we haven’t mentioned it previously because it is so trivial.  What is not so trivial is the game on right now — in which the contrarians actually control the short term market and the trend followers control the long term.  The result is broad swings — or broader and broader and….  And as the Chinese communists say, he who rides the tiger cannot dismount.

But a Marketwatch article reports that of 782 hedge funds average 2014 performance is down 1%.  As we have remarked, a hedge fund is a compensation scheme disguised as an investment strategy.  And anyone who thinks there are geniuses on Wall Street is the legitimate prey of these people.

There is no gold standard — except in gold which is sort of a tautology isn’t it?  We remarked recently that  we had taken a small position in gold — this, though we think there is no recognizable bottom in the gold bear market.  And this after having the market snatch back our profits in a silver short. 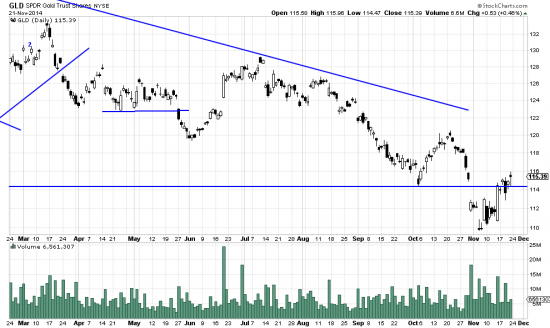 This is a fairly obvious trade, but as illustrated the downtrend line is not broken so it may be just another contrarian rally.  The volume is favorable for a trade and the pattern looks conclusive, but at this point  it is a speculation.  But there it is — and the Swiss are about to return to the gold standard (joke) and so is the wannabe Islamic state.  Wonder what they are doing for Thanksgiving.  Probably eating shiites or something.  The conservative trade is waiting for the break of the trendline.  Here is the long term picture: 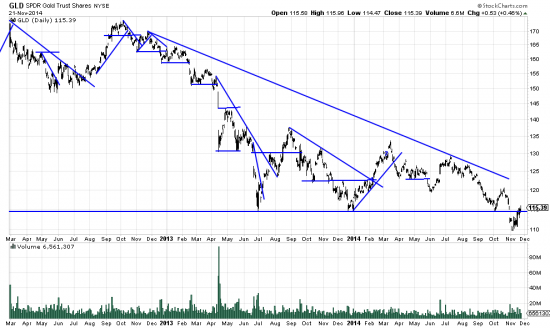 A number of attempts have been made to pick the bottom here, and for shorts the break of the double bottom was an engraved invitation to add on to shorts.  Not.  Trap.

At the moment there is a trade.  Only time will tell whether it is in reality the beginning of a trend.

Everything including the kitchen sink