We have previously remarked on the progressively violent waves shaking the markets. 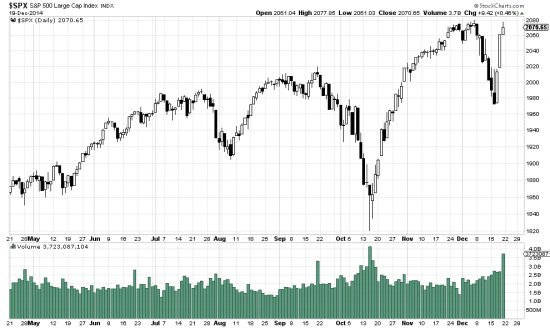 Very clearly here we can see three waves of progressively expanding amplitude, each followed by a downwave commensurate with the power of the preceding upwave.  The latest wave/downwave is notable  for  its violence.  A 421 point day in the Dow has not been seen for years.  In seven days the market was taken down about 5% in gut wrenching steps.  Then like a roller coaster in three days the market recovered the lost ground.  Someone, we think it was Andre’ Malraux, who said (it could have been Sartre) (when we honestly don’t know who said something we try to attribute it to some Frenchman, knowing that if readers try to fact check us they will find confusing quotes in a foreign language that we can claim were mistranslated) anyway, whoever it was said that the market would do whatever it could to cause the most pain to the most people.

We conjectured that the recovery wave here might be a b wave, but in fact it appears that all three of these waves have v bottoms which are especially treacherous, and, if you blink you missed it.  Catching  it requires a Kierkegaardian  leap of faith and a willingness to get your hand cut by the falling knife by jumping on the first power bar up in the sell off.  We lifted most of our hedge (though not all) and caught  the big days up.  Readers should have done the same by just sitting still and observing the system stops.

Ancient history.  This rocket upwave had an anomalous end Friday, fizzling and selling off at the close.  Disquieting.  Meaning we will have to be alert next week to be certain that it is a valid advance and not  a b wave. (We don’t see how it could be a b wave in the prresent configuration.)  The chart below puts the picture in the analytical context. You will see a new trendline from the Oct low.  For the moment we are skeptical of its importance.  At the moment the Mar09 trendline is the most important line on the chart.  No bear market will occur without its being broken. 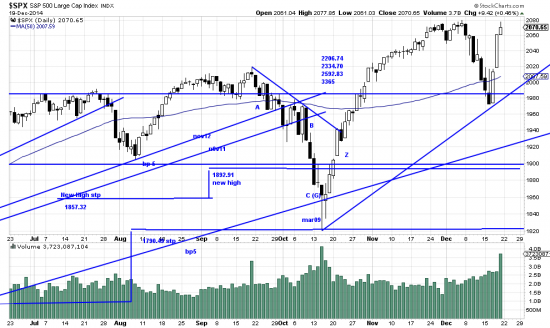 Now for guesses and wild speculation.  As Stephen Sondheim would say, we’re not out of the woods yet.  We need confirmation that this is not a b wave or a dead cat bounce (sorry cats, no insult intended).  So we still have some capital waiting for that final assurance.  We’ll let you know when that occcurs.  We do think we’re due for another wave up, but at lesser amplitude.  And while we do not stand behind our rule of seven targets we stand beside them and will proudly accept labels of genius and prescience if they are actuallly reached.

Merry Christmas and sincere thanks to readers of perhaps the most tortured prose since Alan Greenspan.  And, remember, share your good fortune with your local foodbank, as we do at Thanksgiving and Christmas –the easiest check we write all year.

Marry Christmas, and, as Stephen Colbert would say, Happy Trails to you.

Short the Euro. Party’s over.