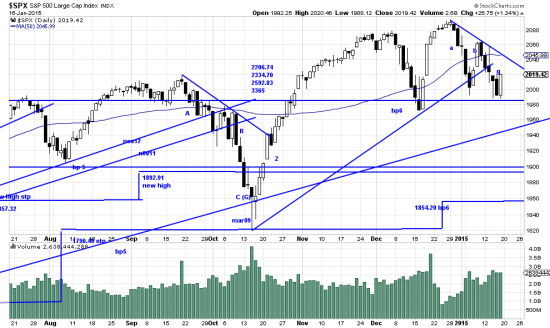 At last!  Something that worked the way it’s supposed to work  — that is, five days down expect a bounce.  Often four days down will have the same effect, and so we were a day early in the expected surge up.  Given the chaos of the market recently there is no guarantee that the alpha-beta pattern is the real truth here, so readers should remain alert.  If we get follow through Tuesday and Wednesday we may have a dependable pattern.  Whatever, but we would want the prudent investor not to add on until the downtrend line is broken on strength.  Unless you like adventure.

Readers now know what it is like to be the object of a drone strike.  But it wasn’t the Canadians who did it; it was the good burghers of Switzerland.  Still recovering  from the  maelstrom of the oil debacle it was like two strikes for investors.  (Or maybe three strikes for those short the Swiss franc).  Right now it pays readers to check their brokers and make certain they are not going to have capital tied up in a brokerage bankruptcy. Grab the money and run, if in doubt.   It was in fact the height of foolishness to be short the franc, however that position is achieved (e.g. USD/CHF.) It violates a central rule of technical analysis:  Never be short a rising market and never be long a falling market.  It is literally amazing how many professional firms and traders  broke this rule and now are crying crocodile tears. On top of that traders were over leveraged so had lost sight of what their true risks were.  The bigger the position the greater the risk.

A short time back we remarked on getting away with a market trick (or tactic) a number of times. (The last time is usually painful.)  In a sense the explosion of the franc is like the explosion of the housing market in 2005-2007.  Too much of a good thing should be reexamined frequently.  Just when you think something is set in stone the stones fall on you.  Wonder how Soros’ kidneys feel today?

Here is the dollar bet against the franc.  Looked good until yesterday.

We were long the franc sometime back and lost interest because of the Swiss bank’s resolute effort to hold it down.  We are presently short the euro which suffered from the  Swiss move.  The profit we made there was immediately eaten by the surge against our position short oil.  Easy come easy go.

Readers should expect more such goings on.  The back waves from the fall of oil have not passed from the system and digesting this Swiss fondue may take awhile.  Isn’t it exciting to live in interesting times?

Making sense of Market-in-Wonderland… (without rabbits and Alice)