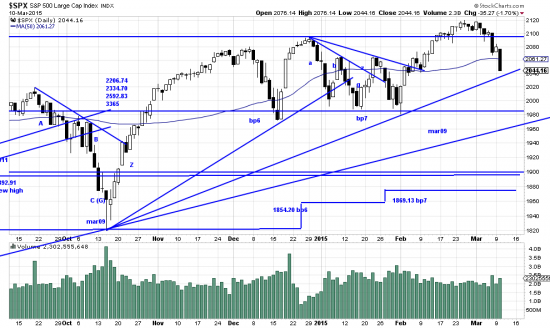 The jungle drums have been beating for a few weeks now that some large investors and hedge funds are going to cash.  (Wait.  Did they ssay crash?) We know personally of some major funds who have done that.  Sooner or later where there is smoke there are bears gnawing on the market, not to mention your  Wall Street contrarian who has been gnawing like a beaver on the market for months.  They appear to have reached critical mass the last three trading days and they have taken a chunk out of the market.

Technical signs of negative import include a bearish divergence in the Dow Theory as well as the PnF analysis of the Dow. 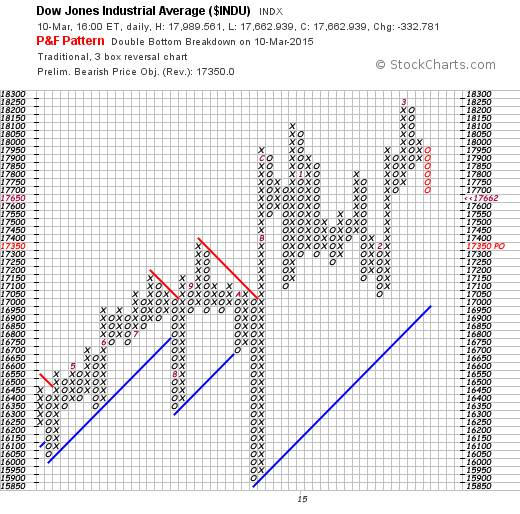 The pundits attribute the present kerfuffle  to fear of rising interest rates.  This fear, as always, is exaggerated and undue, but it will result in a buying opportunity.  Right now it looks like an a wave.  Which means a b wave should follow shortly thereon.

It doesn’t matter why.  The question is how do you deal with it and what is the likelihood of further bloodshed.  While we expect continued volatility, especially if the contiguous trendline is broken, we think  the likelihood of the mar09 being broken is remote.  All that is in the realm of crystal ball gazing.  What one does now is the real question.  You can hedge (buying puts or buying SPXU) or you can grin and bear it, accepting the fact that volatility is a fact of the market.

It seems a little surreal that we are doing this again when we just finished doing it in February.  If we are forming a top it will be not just the mother of all tops, but the mother-in-law of all tops too.  On the positive side this congestion zone which now comprises 4 months not counting the broadening formation (4-5 months) preceding it.  Patterns of this sort can be tops or continuation patterns and so far they have seemed continuations.

We are planning for doubling up when the kerfuffles have joined the chickens.