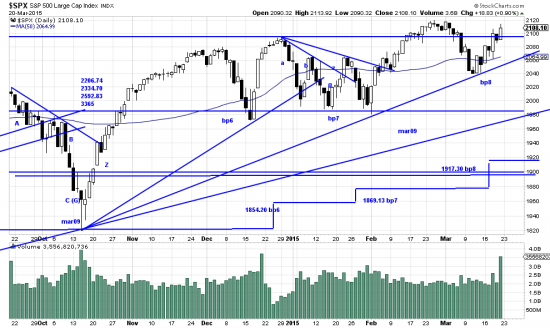 Looking at the wave which unfolded last week we can plainly see the fingerprints of the contrarians.   These people take an extreme up bar as an excuse to get short — and vice versa.  These are people we can ignore — like wasps.  Though the sting is not pleasant.  Those who try to put on serious shorts will shortly be ground up by the uptrend.  But they insist on trying to catch a top at this time.  Here is the psychology behind this kind of trading:  You missed the uptrend –very irritating to a trader — and so you try to catch the turn to get even psychologically.  We’ve done it.  That ‘s the reason we recognize the phenomenon.  A missed opportunity hurts a trader worse than a losing trade.  But this is the opposite of the falling knife.  This is the rising knife.

About this wave — First of all it has given us a new Basing Point (bp8) as reflected by the new stop line at 1917.  The wave  which is beginning to look like a V wave, not a B wave must make a new high to keep the trend intact.  We would not be surprised to see some hesitancy here based on the constant hammering by contrarians and the volume pattern.  The big volume on Friday looks suspiciously like top volume (climactic) rather than progression.  Next week should tell us.

Over the last few days we have seen some dramatic developments.  It appears the short trade in the metals is over, as is the downwave in the bonds.

This is based on explosive bars off the bottom and broken trend lines.  As well as by the feeling and rhythm of the market.  We are closing our metals trade and reversing to long in silver. We do not think a long trend will develop here.  We think it’s trading time, which means most of our readers should watch with interest (and do nothing more) as the snakes bite each other to death.  The euro trade appears at an end also.  Just on what we know now we think the euro downtrend and the gold downtrend will continue after a reaction here.  We think the oil short is still on.  We will discuss the stop next letter.

Perhaps all this is in reaction to Janet and friends, but the chart doesn’t care.  It is just what it is.

Stops. What it’s all about.

Oil has its reasons the heart knows not of….