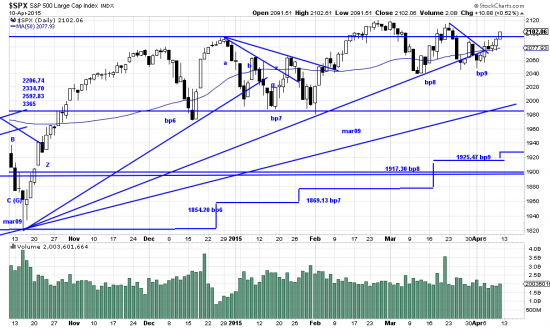 Lee, a man of generous spirit, resisted the efforts of some of his officers to continue the struggle with guerilla warfare.    It didn’t make that much difference of course.  President Johnson gutted  Northern efforts to reform the South and southern civilians continued the struggle until 1965.

We didn’t get to spend that much time observing the anniversary.  We were busy fencing with the market which has continued its policy of guerilla warfare against well meaning bulls. Then  a sharp short trendline was broken (above bp9) and the market surged up.  This battle is by no means won yet.  The recent highs must be taken out and then the takeout confirmed.  We think that is likely, but chastened by recent contrarian waves we are content to wait for the new highs.  We saw a new Basing Point established (at bp9) which raised the stop to 1925.47.

But — if you are an adventuresome mood there is always mischief to be done. 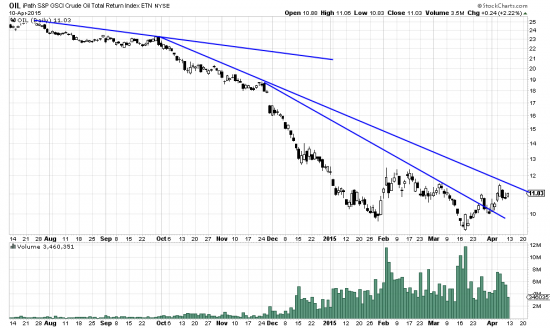 There is no sign of a bottom in Oil — but there is certainly a sign that something is going on.  Look at the volume since December.  Someone is stocking up on oil contracts.  We have heard the jungle drums claiming that oil is going back to $80 a barrel.  Maybe.  At the least there may be a trade here and we are going to put on a small tranche and see what happens.  Don’t do this if you dislike losing money.

Psychoid markets. Psychoid politics. Most fun since granma fell in the well.