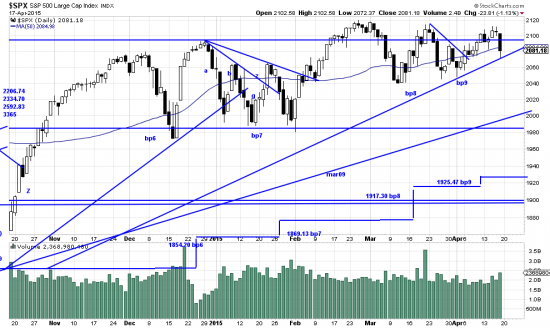 If a bank were robbed and you caught 4 or 5 perps how would you figure out which one did it?  The one with the money, of course.  Well, who’s got the money after the grinding and churning of the last six months?  Goldman.  Friday’s WSJ caught them red handed:  “Goldman’s stock traders  had their best quarter since 2010.”  All during this period we have felt (like feeling the ground beneath your feet) that  major forces were pushing the market around.  Over this period the market was inclined to be range bound and when you have mean reversion traders hammering it the market will revert to the mean.  When the tide is running even Goldman can’t stop it.  Goldman is not keeping the market from breaking out.  The market is keeping the market from breaking out.  (Goldman gives it a nudge here and there.)  The net of this is the market is acccumulating energy for a major move.  It looks like to the upside to us.  But we have a plan if it’s to the downside.  It’s called a stop.

Goldman should be broken up, of course.  They are too big to fail and too big to jail.  Too much profit is followed by too much hubris and that is folowed by nemesis, tragedy and obscene satyr shows.

Friday felt weird but it was not till late in the day that we learned why the traders had not reacted to the oversold market.  The Bloomberg terminals were down.  Thousand of traders were deprived of their tools.  And perhaps most importantly of their chat with their fellow felons.  WSJ again noted that chat amongst traders is one of the most importnat features of the terminal.  Which raised our hackles and cocked our ears.  Who is watching this henhouse?  And, are these charming chaps implicitly colluding to push the market about?  We are writing a letter to the SEC and to the CFTC to inquire about this point.  If we were going to bet on it we would bet that the institutional traders cheat.  Athletes take performance enchancing drugs.  Traders  enhance performance by cheating.

Everyone knows these guys are risk takers.  They are running a risk  we would never run:  Jail.  (Are the Enron traders still in prison?)

We bought the Qs and the UPRO at the bottom Friday.  (Do not do this at home.)  If it was the wrong thing to do we’ll say we were sorry and get out.  Our analysis says that relative highs and lows are not so important now.  We are in a congeston phase, so Friday is probably just a reach for the bottom of the range.  If it’s not we’ll say we’re sorry and look to our stops.  Readers can play it smart by regarding all this as a little ocean squall which will pass over.

The Dow, the S&P — lots of nothing

On the razor’s edge…