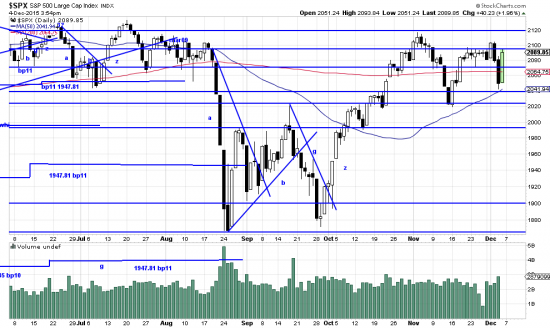 Thursday the bears hammered the market.  Friday the bulls hammered back.  In what looks like a major way.  Excitement about the Fed raising rates?  Be careful to watch this hand while the magician produces a rabbit on the other hand (that is the famous  “other hand” referenced frequently by all economists).

This doesn’t explain it all for us.  We think something else is going on.  We think major money has sensed a perhaps major change in the national mood:  In case you hadn’t heard Congress just passed (a bipartisan event) a major highway infrastructure bill. (First in 6 years.)  If Congress awakes and does something about its national responsibilities (no whining, no tears, no tantrums, no sabotage) the bull market will definitely be on.

We just said that the Qs had broken out.  We have been looking for the chart that made us say that. It certainly wasn’t the Q chart.  Meaning that we have made our first  mistake of the year.  Well, nobody’s perfect as Richard Russell said.  Actually we like the position so we’re going to see if it turns into a trend trade.

We computed a stop based on the identified basing point:  102.91.

Beaten down tech stocks worth looking at….

Air pockets and instant recoveries… and a secret Magee oscillator…