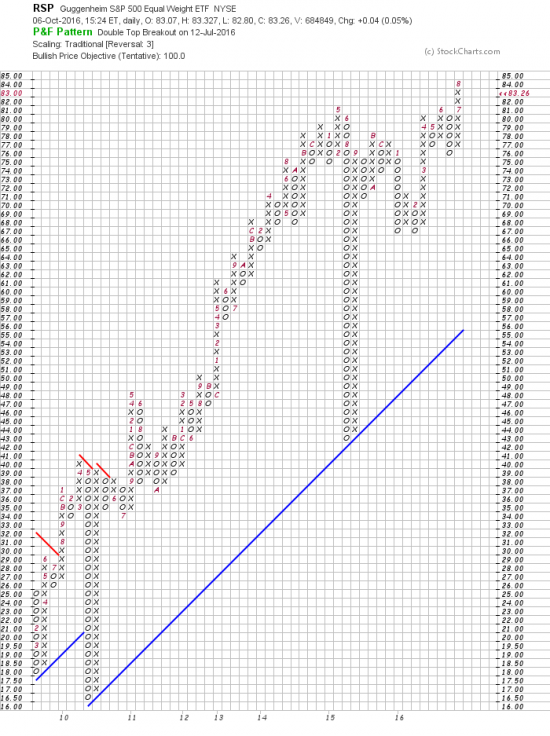 We are in, and have been in, one of the most difficult periods in our 55 years in the market.    We re not alone in this assessment of the market.  Hedge funds are dropping like flies and mutual funds are watching  investors flee like refugees leaving Syria.

Speaking at the WSJ Pro Private Equity Analyst Conference in New York, R. Baratta said that “for any professional investor, this is the most difficult period we’ve ever experienced”, adding that “You have historically high multiples of cash flows, low yields. I’ve never seen it in my career. It’s the most treacherous moment.”

Not to worry.  This is nature’s way of thinning the investment herd.  Obviously no one –not even ourselves — knows when this drought weather system will pass on over.  Interestingly we are entering into the monsoon season — the seasonal that says the market should pick up.  We habitually ignore these things, but it is worth noting that the PnF systems are firmly bullish —as for example the PnF chart of the equal weighted S&P500 above –RSP.  RSP historically outyields the cap weighted S&P, and is a good addition to a portfolio, as are the Qs and the IYM.

We would use a 5% money managment stop on these issues, and would scale in in four or five tranches, the second tranch dependant on continued progress, and the first tranch smaller than the others.

Meanwhile back at the SPX yo-yo markets continued — yo-yos as used by munchkins. 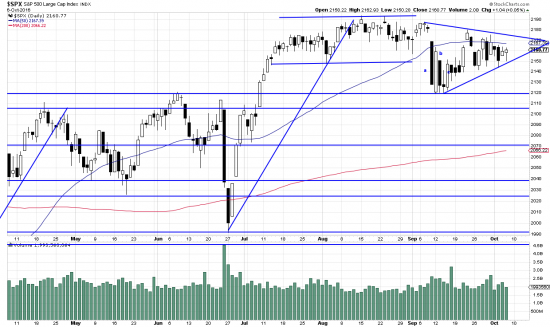 As is obvious the panic sell off is resolving itself into a triangle occupied by yo-yos.  We don’t expect much from this whichever way it breaks out.  We think the market is waiting for a resolution to the election.  Some semi competent analysts have predicted a 7 or 8 percent sell off if Trump is elected and a 4% surge if Hillary is elected.  You can hedge the risk by buying puts, but we think any effect will be transient so don’t plan to do any hedging ourselves.