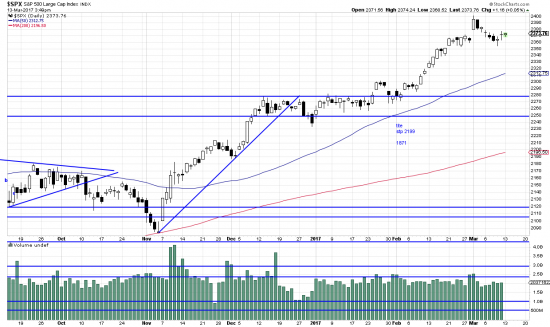 133 points on this wave, which pretty much qualifies as nothing.  Though it’s better than a poke in the eye… as the saying goes.  We are still on the fence as to whether the formation hanging from this flag pole is a flag or not –; the flag pole is 194 points but the market keeps lying there like an alligator.  If it wakes up it could eat you pretty easily.  And it might wake up shortly — given that Janet is due to raise rates — or not raise rates — shortly.  That’s like a warning that the winds are whipping up in the Bermuda Triangle.  Not to mention the Federal debt ceiling is about to be the scene of sturm und drang.    It will be interesting to see what the solons  do given that they hold all the cards.  Probably attack each other.  Nonetheless it is a warning to expect volatility.  We’re probaby going to grin and bear  it with a few well chosen epithets.  Congress always inspires our profanity.  This market is still waiting for Trump’s other shoe to drop, or Trump’s other tweet to twit.

“Americans are by nature a gregarious  and honest people.  Our only native breed of criminal is the congressman.”  Mark Twain.