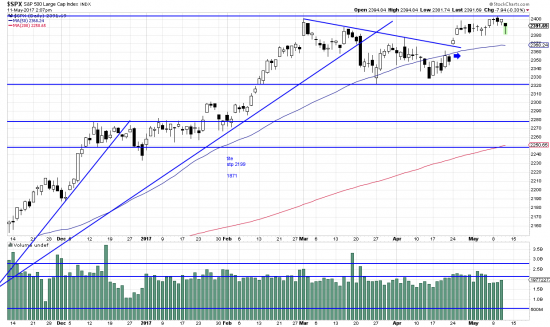 The market continues to supply news of dramatic interest to sloths and possums.  Unfortunately investors are forced to consume the same fare.  Which hardly seems fair.  But perhaps something can be made of it.

First of all we know that nothing will continue until price breaks out of the area defined by the two topmost horizontal lines.  We also know (though not illustrated) that the extraordinary  low volatility in the market can (should) explode at some point as volatility reverts to the mean.  No one –including the Russians and the FBI– knows when this might occur.  But — certainly–not until the majority of investors and all of the traders have died of boredom.  Do not be deceived:  This letter will pull the fire alarm when that happens.  Of course we thought it had happened in April when we got a double gap in the SPX.  While this is rare it is not unheard of  and like all technical signals subject to confirmation.  Instead more grinding boredom resulted.  The PnF system continues  to believe in 2549. 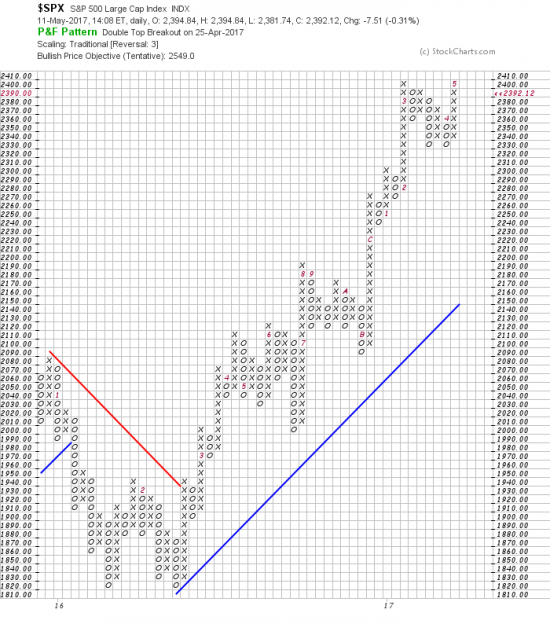 Now we put on our economist hat (dunce type with moons and stars and things on it) and reveal what’s really going on.  The market was injected with a sugar high when the Trump was elected believing that rape pillage and plunder  were coming back in fashion.  But it hit a wall (a wall?!) when Trump proved incapable of producing anything but executive orders.  But it hangs on waiting for that trillion dollar infrastructure program.  Also, technically, investors who were left at the station when the fun started are coming to believe that the market can be depended on again.  (Cf Lucy and football meme.)

The Voyage of the Bogle…