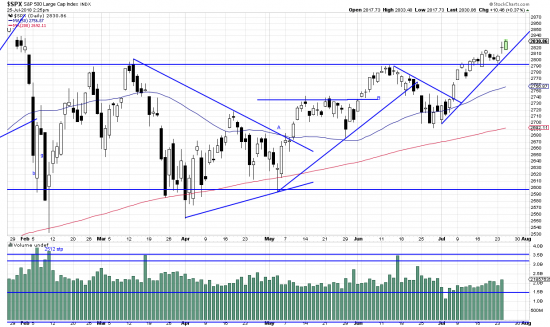 While we believe that contrarians still control the market, there is no doubt that prices are breaking above their highs and throwing off buy signals.  The new high was made a few days ago –on such lackadaisical action that it looked like a bull trap.  But now we are getting confirmation thrust and buying is less risky.  In fact mandated.  We don’t think it is an “all in” situation but these are the best signals we have seen in months and scaling in and adding on are certainly in order.  Thee is one more high to subdue before the all clear signal flashes, but this action is very favorable. 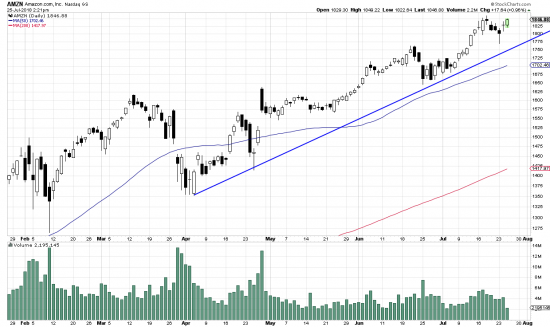 Amidst the boredom and tedium of the last few months we recalled our time as a green systems engineer at NASA and a recurrent regret we have:  if only we had kept 1 (one) stock from those positions we had in 1960 it would be incredibly valuable now.  So we bought laughably small positions in AMZN and GOOG and FB  and have been pleasantly surprised with the profits.  We expect our kids someday to reap the profits, or drink the profits (one cocktail with a little umbrella in it).

There is of course a special risk in AMZN.  Following the hallowed tradition of presidents wreaking financial damage on those who criticize them, Trump periodically attacks AMZN because Jeff Bezos owns the Washington Post which of course tells the truth about Trump, irritating him no end.  Of course he is just keeping AMZN in the public eye and his damages are temporary.