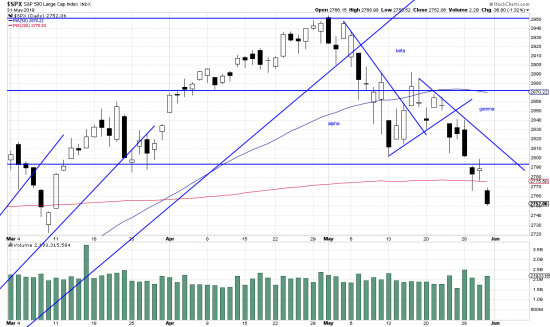 The previously identified abgz formation  we have looked at has collapsed and is much larger than appeared.  We are now in the gamma wave and worse, are in a downtrend  that is not predictable.  Eventually we will see a zeta wave, but when is not known.  Classic management technique directs either exit from the market or robust hedging.  Below we will look at support areas.

Number 1 identifies areas which have previously been important.  No 1 is probably the weakest of these but might have a chance for arresting the trend.  Number 2 might almost be considered a part of Number 1, so there is an area of support rather than a precise number.  The penetration of any of these lines is important, but if line 3 is broken we are looking at a test of the bottom of the chart.

We are reminded of Hemingway’s remark about how bankruptcy happens:  “Slowly, gradually then all at once.”

Long the Dow and the Qs.

What were they thinking?