Today, Friday October 3 2008 the House of Representatives finally passed the (take your pick) Wall Street Bailout bill, Pig with Lipstick bill, Pig in a Poke bill, Bank Rescue bill, Pork and tax cat bill, Secretary of the Treasure permission to steal and mess around bill, Bush Administration Swan Song bill, the Reverse Robin Hood bill (rob from taxpayer, give to bank)….  You get the idea.  So did the market which basically urinated on Congress and did what we recently said it would do — tested the recent panic low:

The complete significance of this move is not yet clear, and will not be clear for at least some days — if not a longer time.  Based on the fundamental economic situation we would opine that lower prices are to be expected.  The market is no respecter of our economic analyses.  It could well go up against all reason, but this is the witching month.  It’s supposed to crash this month.  Here is the long term view.  Remember that we have been short since January.

A full fledged bear trend.  The stop is so far away we haven’t bothered to calculate it — up there a minimum of 3% above the August high.

How passing strange.  The economy is going down (“If we don’t do something this sucker is going down,” said our President in the elegant argot of Texas in Washington power.  All Texans are not hicks– see Katherine Ann Porter and Cormac McCarthy) and the dollar is going up.  As in UUP.

We habitually do not explain basic technical analysis in our letters assuming that our readers are familiar with our books.  The pattern here is not really well explained in Technical Analysis of Stock Trends, 9th Edition because it is not from Magee’s work, but is based on modern observations by ourselves.  We call it the “Tight downslope with power bar”.   As shown it combines a short sharp downtrend line and an explosion across it.  The explosion (here the gap) is often preceded by smaller power bars (as here) and run days.  The retracement in September is the natural downwave reaction to the upwave that started in August.  Actually our system has been long since March. (But we didn’treally believe it completely.)   Here is our March chart.

A few days later we were spooked by the down draft and thought it a cancelation of the buy signal.  In fact, following our system of Basing Points the stop would have been under the low of March which in fact is intact to this day.  So the system basically has been long since March (for the aggressive trader) and the chart above shows the entry for the conservative trend follower.

Mark Twain said “We have the best Congress money can buy.”  We think we’re going to have to start paying more.  This is an economy in tatters, an Administration in tatters, a Congress in tatters, a country in tatters.  The only thing worse than the bailout bill would have been no bill at all, which it looked like they were going to do for awhile.  Nothing, that is.  What they did is one of the worst solutions to the problem — buying toxic assets at fraudulent prices.  Or that is what we expect them to do.  Unfortunately they have almost 4 months to squander this capital before they take the long walk out of power and into court under indictment.  At that point probably Larry Summers as Secretary of the Treasury will be drafted to salvage what he can out of the mess.  Mark this fact well:  This attempt to save the banks without saving the poor bastards who are losing their houses will fail to stabilize the economy.  Furthermore the Obama administration will have to implement (and should) a Roosevelt Works Progress Administration.  We could go on for hours but it would rise your blood pressure –and ours– so, how about a little comic relief? 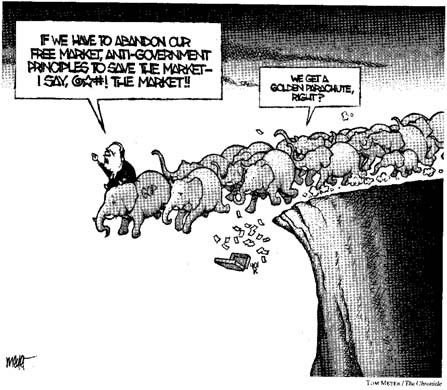 The contrarian empire strikes back…