Noodling about the S&P and where it might go from here.

A short time ago we stirred up one of the lists we belong to by commenting that the SPX might go to minus 4.  We had to post a follow up to assure them that we were joking.  Of course everybody hates a jester when times are like they are.  Grim.  In general.  Here is the chart we showed them: 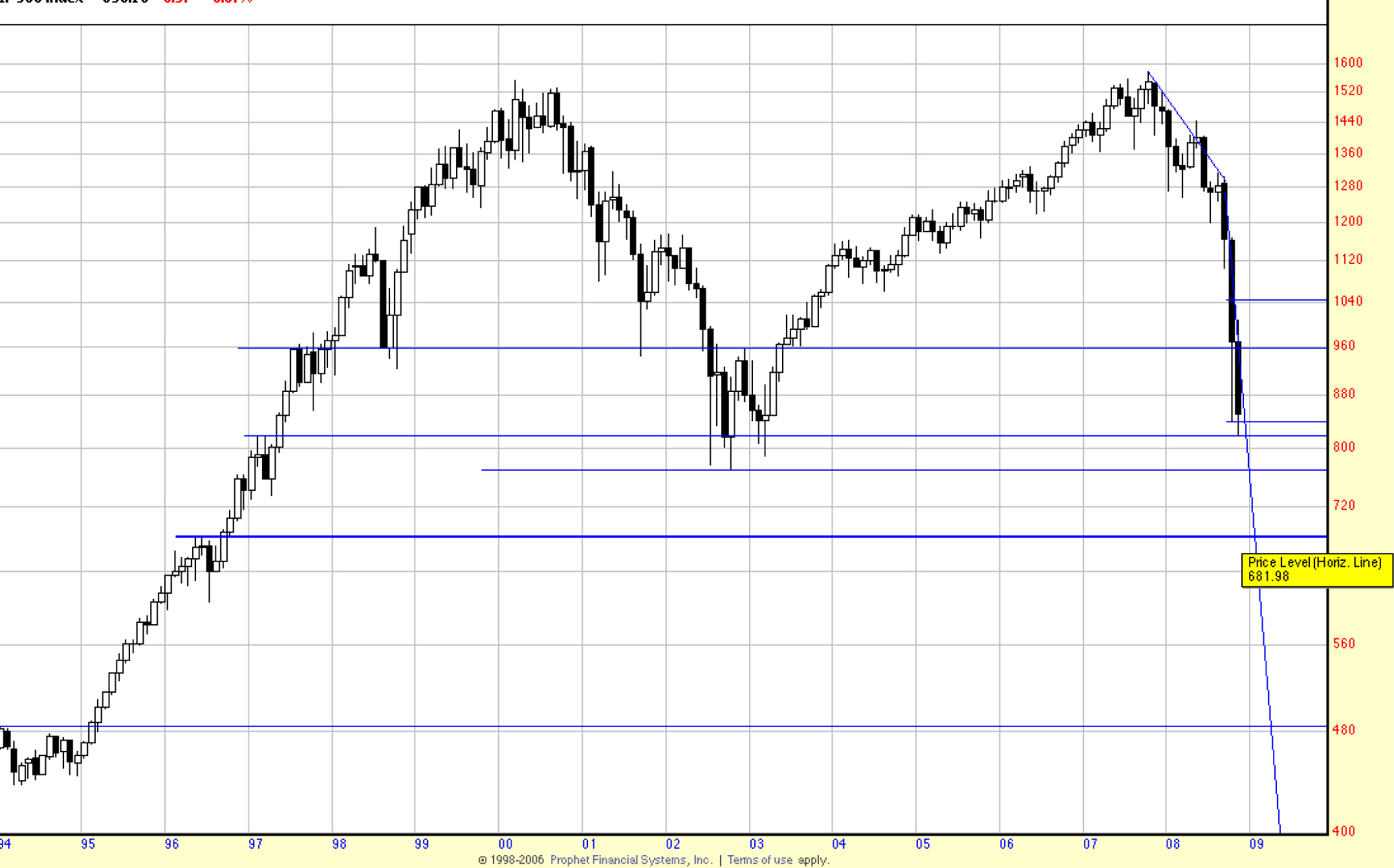 We measured from the top to the (presumed) neckline (depth of formation 784; price at time 780; 780- 784.) and derived a target of -4, contending that what we see here is a double top. We were joking at the time, but on reexamination we are rethinking the analysis and the joke.  The thinking is apocalyptic.  After all it may be a double top.  If it is the prognosis is worse than grim.

We have said ad nauseam that it is not necessary to forecast in order to know what to do in the present.  We are presently short and that is the way to be at present.  If the low is taken out here being short may not be sufficient.  Massively short would be necessary, and probably massively long precious metals.  The exact consequences – or causes – of a bear market like that are unforeseeable.

At present we think the likelihood of a market implosion are not too great, but the way the world financial systems and interlocked economies are rocking on the tipping point one has to be uneasy.  Right now cash and shorts are king.  If super- major- hyper-  ultra- inflation took place cash would deteriorate by the day.  Thus, precious metals.  (And large supplies of chocolate and beer.)

Here below are some more reasonable scenarios for the market:

Line 1 neatly coincides with the neckline of the 02-03 kilroy (h&s to you) bottom and a support zone on the upleg at left of chart.  The present market price didn’t even bother to wave at this line as it sliced through it.

Line 2 neatly marks a support zone on the upleg and offered some support to the 02-03 bottom.  Price is hovering on this line at present.  If this is taken out, and Line 3, which marks the bottom of the support zone, also falls then Line 4 represents a potential target and support.  If that falls there is nothing but thin air down to Line 5.

What is the probability of markets so catastrophic?  Oh, 20%.  30%.  5%.  50%?.  Would you believe 60%?  NO ONE knows.  And it depends very much on what our esteemed political leaders do and how successful it is.  You won’t have to wait long to find out what the market thinks of what they do.  It will inform you right away.

As always, after examining the grand context we look at the immediate situation to tell us what to do.

With a market context like this it is difficult to feature buying stocks.  More on that later for suicidal readers.

Wave forms in the Dow.

Buy the Dow –the analysis