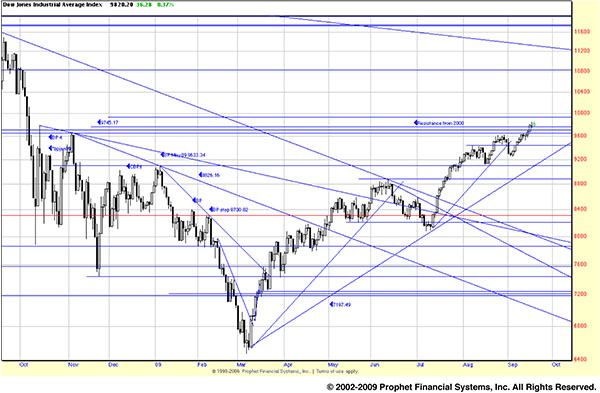 We have been so occupied with watching for the downwave that we have discounted the power of the bear market rally since March.  Not totally discounted, since we have been finding long stocks since the very bottom.  And in fact some of these sniff at the mere 51% advance of the Dow from the March low — profits in the hundreds of percentages.

Now it is time to acknowledge the fact that the rally is a solid uptrend, and has even had a downwave of some consequence. (June-July).  If we were looking at strictly alogrithmic systems our stop of 9663 has been taken out, and the June downwave even created a stop which has been taken out.

Of course price at this moment is at the point of maximum resistance as our horizontal trend lines indicate.  We remain deeply suspicious.  We think there is a foundation of sand under this market, and the rally is largely due to Goldman and its ilk seizing an radically underpriced opportunity.

If we were to buy the DIA or the SPY or the QQQQ (and we are considering it) it will be, as we say, a toe, instead of a foot in — scaling in like a cowboy going into freezing water a toe at a time.

Here is a way to look at it.  Hold your nose and put a toe in with a money management stop 5% back and be ready to back right out.  Any radically negative behavior would take us out before the 5% mark.

We will be walking on egg shells, like a paranoid duck in  a shooting gallery.

This chart is also at http://www.edwards-magee.com/nf08/dowsep2009.pdf where you can see it writ large.

Bond implosion coming. TBT a way to play it.