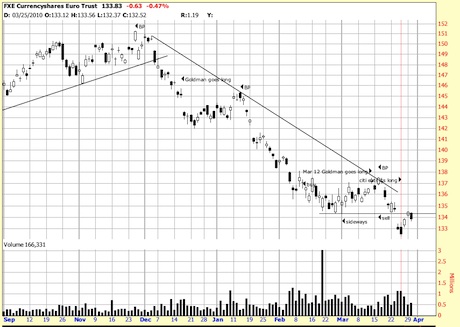 Interesting.  Today’s WSJ documents some canny trading by Goldman Sachs and Citi in the euro.  We have marked their reported trades on the chart.

These trades are a memorial to the principle that having opinions about the market will get you in trouble and lose money.

Where we went sideways in March, and then sold March 24 on the downgap is marked on the chart, so for the record we are short the euro right now.  We have marked the Basing Points on the chart also.  As we have previously remarked there is really only one trade here for the patient trader.

As can be seen by the next chart we have not been particularly patient in this market.  We keep being spooked by rallies — as though we were trading it with 100-1 leverage, which is really what we are subconsciously doing.

Even at that we’re doing a lot better than Goldman and Citi.

Where does this leave us?  (Top chart.)  Well it leaves the patient trader still short with a stop above the March 16 high of 137.

For ourselves we think that the closing of the downgap is enough to send us to the sidelines.  We think it may be an example of the bear-trap-snap.  And we can always get back in when a pattern gives us a signal.

Gold in them thar…