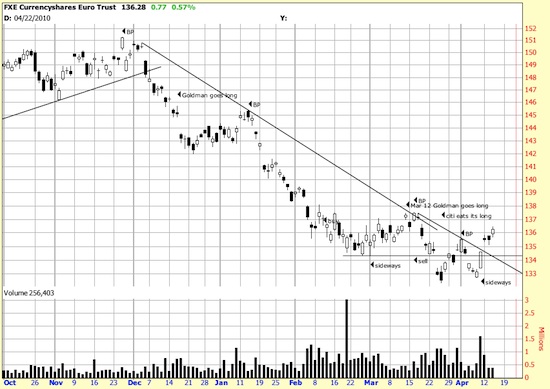 March 30 we remarked that we were going sideways the euro as a trading decision while the system was still short.  We pointed out that we kept doing this (fading the system) and how any half witted systems trader would have made one trade of the euro trend.

With what’s left of our wits (less than half) we’re now pointing out that if you’re trading the euro, rather than trending the euro that it looks like there is a buy signal.  Observe price popping across that little trend line.  Now you have to be careful here, because that could also be a pattern gap.  And all of this business since March could just be a Greek tragedy — or a Greek tragi-comedy.  Or perhaps some Teutonic strum und drang. Angela has been no angel to the Greeks in this drama.

Many sensible traders would just stand back and let this play itself out.  The way to do that is draw a line across the top and bottom of the formation and resist taking a position until it breaks out one way or the other.

Any way you slice it the Greeks do deserve a spanking from Athena.  Please include Goldiman in the punishment queue.

Change of context…clown show over… for now.