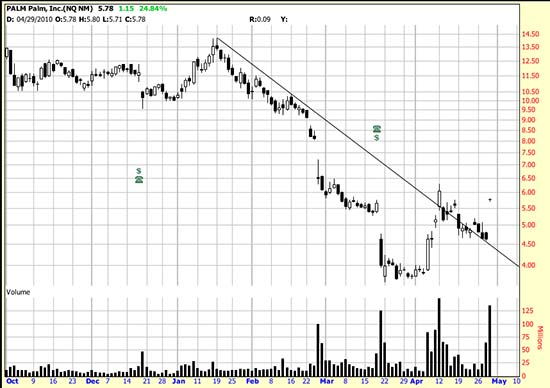 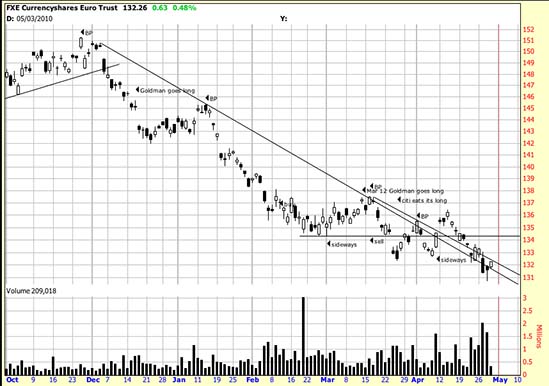 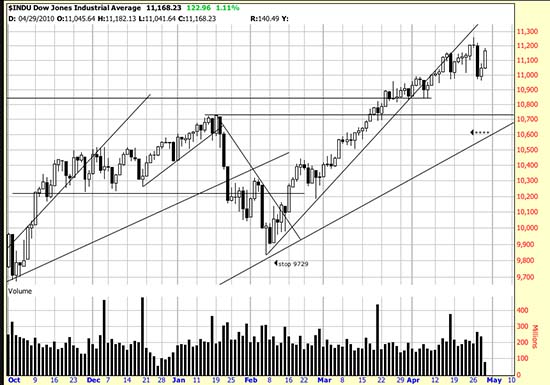 As we pointed out, PALM was a shell game.  The takeover price is a disappointment if you bought it after the signals.

And whereas we remarked that we were sideways the euro as marked on the chart the system, as noted by the Basing Point remained and remains short.  Listen to the system.  In defense of himself (ourselves?) some of our accounts remain long the UUP.

But where the system and even himself is shining is in the broad market, which is where we’re supposed to be.  We think the general investor should be 70-90% in the broad market — the Dow, the S&P, the QQQQs and moving ETFs.  Handicapping stocks is for gamblers, but even the general investor can use a little thrill from time to time — as for example we are long C, BAC, F as well as a bunch of junk we picked up at the bottom –FNM, FRE, and some rare earths we got like a virus from Dines, as it were a bug we picked up in Africa.

Now here is what’s interesting about this particular letter (good lord, thought he’d never get to it):  The major inidices may be setting up a sideways pattern instead of a downwave.    Remember, the market always behaves to cause the most pain to the most involved.  A sidewave here instead of a downwave will leave a lot of contrarians and bears crying in their beer.  The probability of an upside exit to the sidewave is very high.  You would think (and the market and the contrarians would like us to think) that with a Greek tragedy going on and a Spanish drama, and PIIGS substituting for cats and dogs, that a downwave should be forthcoming.  And it might be — and if it is we have a stop for that.  But if they (damn, them, that THEY –we’ll get them in the end) can’t break the market with a 200+ powerbar down Tuesday it looks more and more like they can’t break it at all.

As always — it remains to be seen.  If speculatively inclined (i.e.  marginal signals) F, C, BAC might go for light add-ons.