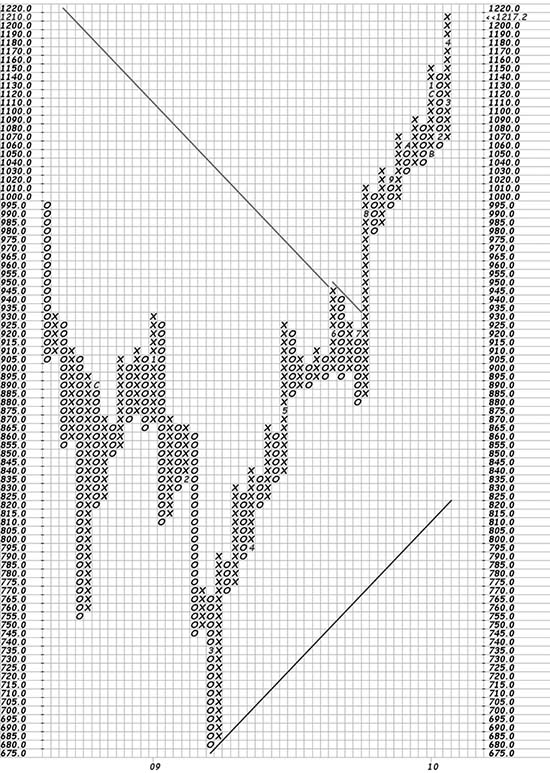 But what if there were a technical way to attempt to establish some long term targets for the market?  And what if it had a credible provenance and were originated by a credible market wizard?  Our colleague at Golden Gate University, Prof. Hank Pruden, is a world authority on the work of Richard Wyckoff (we’re not).  Wyckoff was an extremely interesting and perspicacious observer of the market and of methods for dealing with it.  (Sort of like Edwards & Magee.)  One of his methods  for establishing targets for price movement was the point and figure chart.  (See above.)  Wyckoff  thought –or observed — that markets exhibited cause and effect — that is, for a major move to occur (effect) that a major base had to be formed (cause).  (Imagine the humongus rounding bottom that we have remarked on numerous times in gold.)

The way that this analysis is practiced is to measure horizontally across the formation to establish the number of boxes the formation has transversed.  This is where the method gets shaky.  The exact level at which to make this measurement may involve some sophisticated judgment.  So opinions may enter in.  Basically one wants to find the thick part of the formation where there has been considerable activity.

Once a horizontal measurment is taken — and we are not required to choose only one level –in the 08 09 market because of the messiness of the formation several levels are candidates — we multiply the count by three (reversal box size) and multiply that times the box size  (5 in this S&P chart).  Measuring across a couple of levels we get horizontal measurements  varying from 49 to 59.  Adding the product to the bottom most point we get to a range of  targets for the S&P — 1415 to 1565.  These are not so far off from Professor Pruden’s figures.

In 2004 Professor Pruden aroused some interest in the San Francisco technical analysis community with his analysis of the Dow.  He published (in writing) a prediction that the Dow would go to 14400, when the Dow was stymied below 11000.  We glanced askance — as everyone knows we shun forecasting with religious zeal.  We just follow the trend.  Pruden was wrong.  The Dow only went to 14200.  At the time he said that he was cashing in his chips and taking his winnings, as he well deserved to do.  Since close counts in the market as much as in horseshoes it was a dazzling performance.

We have not experimented much with Wyckoff’s method.  But it is worth giving some attention to.  Frankly we can supplement the technical analysis with an economic analysis.  If financial reform is implemented, and with health care reform in process, and with the BRIC countries acting as economic engines to counter balance the US economy, with the Iraq war winding down, and with new technologies coming on line we can easily see a great new bull market.  In addition the protean untamed American economy should never be sold short over the long term.  It is truly astonishing, and will continue to be astonishing.  Look at Apple.  Look at Google.  Look at Paulson (the good Paulson, not the bad Paulson).  Does anyone doubt that American ingenuity will continue to create instruments of mass destruction?  And capitalistic creativity.  edwards-magee is bullish on America.

Now for the caveats.  PandF charts say nothing about time.  We have no idea of when these targets might be reached.  They also say nothing about downwaves which will be encountered on the way to the target.  Leaving us with wave analysis and Basing Points.  Which is fine. That’s what we were going to do anyway.

In a future letter we will make some wild predictions about time.

Apocalypse soon? The S&P at the tipping point